Yes, I admit, “The Road Less Travelled” by Robert Frost (apologies if title and author incorrect) is a classic poem for me and I love the words and lines in it.  But yesterday I really got to take the goat track less travelled even by the Timorese.  But lets start at the start:  my mission was to deliver over 100 back packs to a senior high school on the island of Atauro.  But of course, who wants to go to all that effort for just one thing?  So I threw in some steel posts for the island soccer field (seeing as FIFA’s started again) and took 15 or so water filter sets, and also checked a weather station, scouted a ‘new’ path to Atekru and inspected Emmy’s Eco. 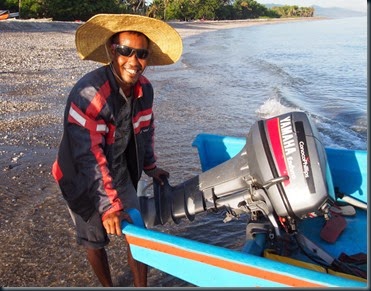 Trick is getting over the ocean first to make it to the island.  Unknown to me, our boat had a hole in the “sealed” buoyancy tank.  The extra weight of water made the going very slow.  Seas were very calm though and we made it with no trouble. 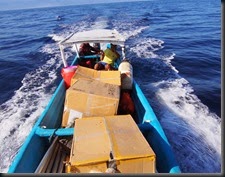 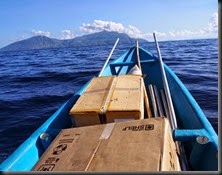 Cargo loaded and off to Atauro in the distance.

First stop along the coast was the weather station at the police station – completely unkempt and over grown with trees and vines so it was rendered dysfunctional.  These trees grow up in just a few months in the tropics. 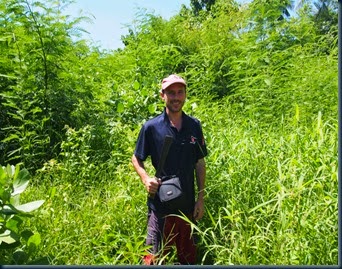 Now where is that weather station?!

The poor single policeman was occupied with a young girl reporting sexual abuse.  It was enough to break your heart so I said a little prayer for her.  And gave him a water filter set so at least they could drink clean water. 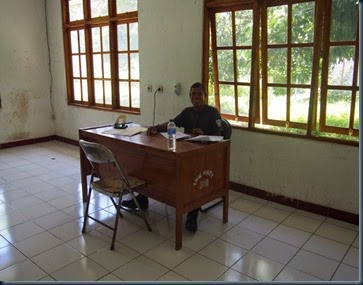 Police headquarters where he has to deal with the tough business of the island.

Next stop down the coast was the school.  We off loaded here and set up the goal posts. 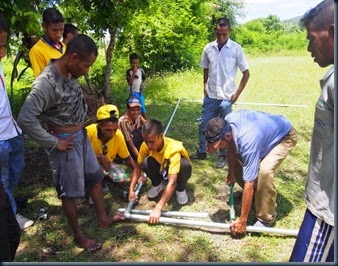 The school was very happy to see the foreigner so a school assembly was called together and they were VERY excited.  For a comedian it was a very easy crowd.  Timorese like to know a bit about you so when I got to the part that my wife was pregnant there was a big uproar of excitement.  So I took the opportunity to preach a few morals about how doing the wrong thing is like putting rocks in your back pack – life just gets heavier.  This works for them as many need to work 3-5 hours to get home from school (one way!) so you dont want a heavy pack. 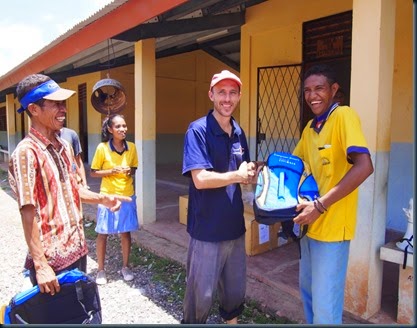 Presentation of the packs in return for million dollar smiles.

I was supposed to get to the part where Jesus frees you from your burden but I am not really sure if I got that far(oops).  So we had a symbolical presentation to one boy and one girl representative and a photo shoot.  Being a stirrer and given the crowd, I thought I’d put my arm around them both for the photo, and as expected, got a big uproar from the crowd again (oops).  Thanks to Lucas, Angela and the kind folks who sent us those bags.

I left the teachers with a water filter set also so at least in their staff room they could have a drink of water.  (teachers in Oz, spare a thought for your Timorese neighbours).  My demonstration on how to use the filter system was adeptly taken over from an amazingly bright young girl, Gracella, who immediately offered to go and fetch 10L of water to pour into the system.  She had been using the same type of system in her home which was received from a previous delivery. 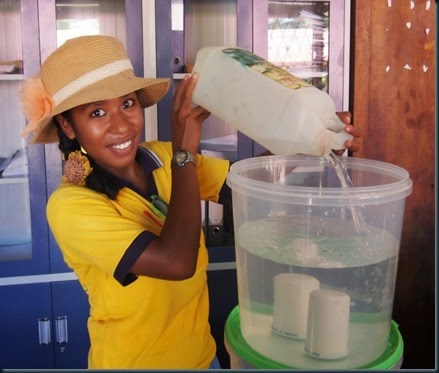 Gracella demonstrates the water filter system to her teachers.

Then I asked for a volunteer to go with me to find a path straight over the mountains to Atekru on the west coast.  Most people take a long round-a-bout path along a road through a number of villages. But I had a map and compass and thought there’d be a short cut.  I got one brave volunteer, Azer, who turned out to be an awesome young man. 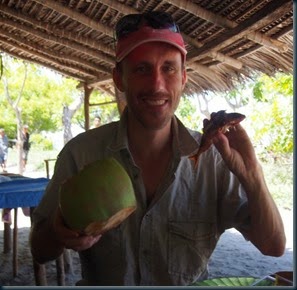 After a meal of fish, rice and coconut, we set off up a river, turned up some cliff country, climbed up grassy slopes, through forest and got up to the top of the mountains in 2 hours.  Awesome views.  Azer said that in Portuguese times, his ancestors would walk this path to avoid getting captured by the foreigners.  Now it is rarely used. 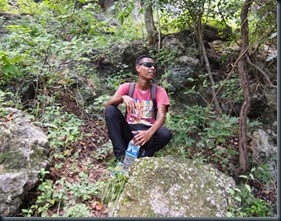 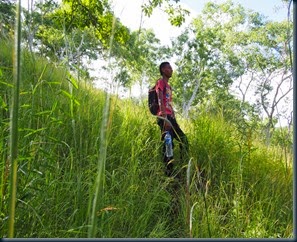 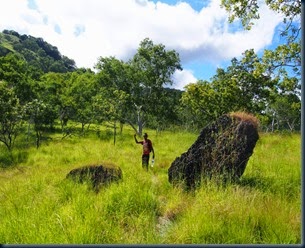 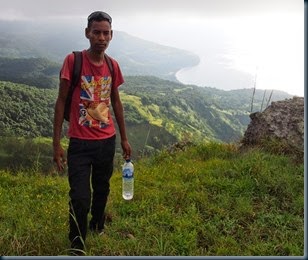 Azer leads me up the top of the mountain, where you can see his home village in the bay of Atekru off in the distance.

From the top we headed down through rocky gullies closed in with trees and vines, limestone rock slopes and then into corn fields perched on limestone terraces and finally came to the last cliff over Atekru for sunset. 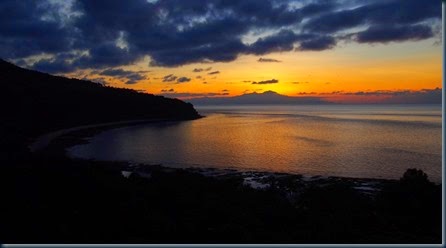 I stumbled into Emmy’s place in the dark where we feasted on freshly picked corn, beans, moringa leaves, fish and coconut.  I was very tired and dehydrated from the walk.  For a grand finale to the day I went down to the beach to wash before bed and found the most amazing phosphorescence.  Stepping on the waters edge sent out a spray of a thousand little stars twinkling in the water.  It was like a scene out of Avatar where he first walks through the forest at night.  There was no moon, and the stars in the sky were amazing so I just wasn’t sure which way to look. 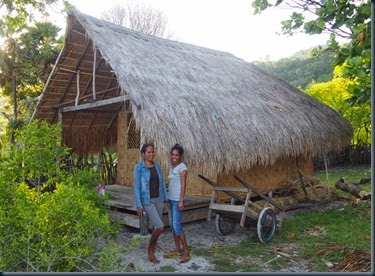 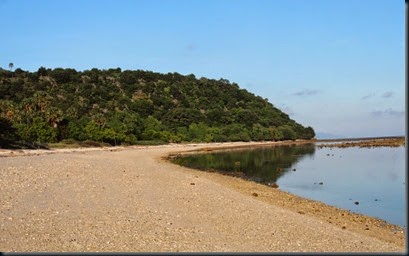 I woke up in the grass hut, had some corn and coffee and then headed off down to the beach to the boat.  You have to get wet to get to the boat so I did a quick snorkel only to be amazed once again by an incredible array of jelly fish.  The only thing jelly fishy about them is they’re made of jelly and they sting a little.  They come in all sorts of shapes and sizes and generally have some electrically colourful bits to them.  Some of them have something like neon stripes with strobe lights of fluorescent green and red cruising up and down their … o heck how do I describe the indescribable?!

You’ll just have to come with me one day on this road less travelled.  That will make all the difference.