The Presidential Election in East Timor

Next Monday is the final vote to choose the next President who will hold the position for the next 5 years. Stickers are going up on walls, meetings are being held around the country and I’m sure the whole thing is on the news every night. (Although many Timorese have access to a TV, I am still yet to get one – things of the devil, really, those TVs) Must be much the same as the American presidential campaign. Except here, people travel in the back of trucks along muddy roads to get to one of these “pick me!” meetings while someone’s scrambling to set up a generator to run the loudspeaker because the electricity is on the blink. Some folks are probably wondering whether its worth going on a 4 day, dangerous and trying journey to make their 5 minute vote count. 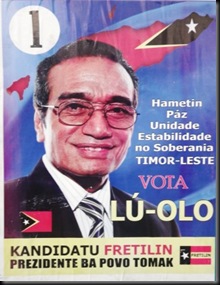 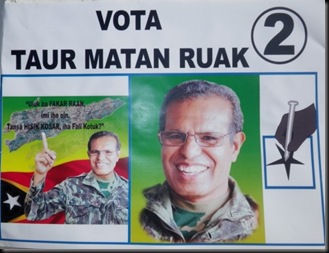 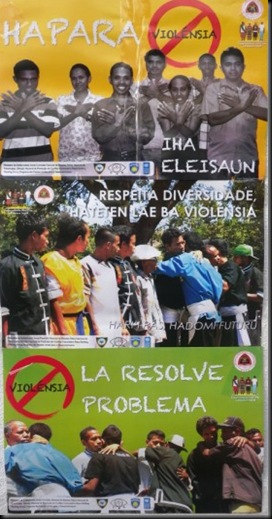 So its between Taur Matan Ruak (Two Sharp Eyes) and Lu Olo. Xanana Gusmao (current prime minister) is supporting Taur Matan Ruak while Lu-Olo is backed by the mighty Fretilin Party. I myself would probably go for Taur Matan Ruak but, as a stab in the dark, I think Lu-Olo might win. The most important thing for this country is that we get through the next 5 years with peace.

Below a UN security guy gives us a wave from the top of his beast – he’s going to leave this thing for me after the UN pulls out ;)  The election posters to the right are to encourage people to not be violent (hapara = to stop).  The middle picture shows martial arts representatives doing the whole group hug thing to show its all good, no hard feelings

Note that it has just been announced that the Parliamentary election will be held on July the 7th. 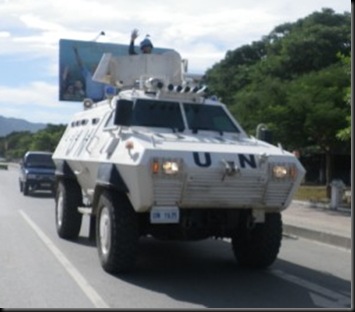 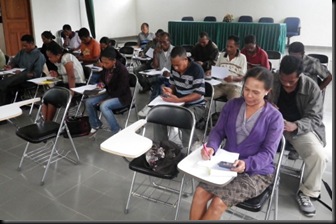 I have been travelling through the mountains teaching maths to agriculture workers this week. That means 4 days away from Cynthia, Serenity and Israel. Why maths? Well, because maths is just the greatest subject in the world! Apart from that … hmmm … oh yes, numbers do come in handy when you’re trying to grow enough food for a nation. For example, I want to set up grain storage in sheds holding 20 tonnes. My plan is to use 2000L Silos but corn is not 1kg = 1L (like water) so I’ll need 12 Silos. Who cares? Well, I want to run this as a financially viable proposition so that the farmers actually pay for the facility through corn sales. So we need to explore the cost of the silos ($640), cost of shed ($3000?), income from sales at 50c/kg etc etc. I rang a company today in the mountains that said they buy about 8000 tonnes of corn a year and want to double it. Do the maths right and it means $4,000,000 worth of corn (remember that 1000kg = 1 tonne). And they buy it all from Thailand because its cheaper and better quality. In 2010, they added in just 10 tonne of Timorese corn which just happened to have too high a level of phytotoxins. It contaminated their production line and the plant was shut down for 4 months – ouch. Its not a simple game. But I hope to God I can win; I hope, for the Timorese sake, we can win. That’s just a small reason why maths is important.

So what sort of things does a maths teacher carry on the road in East Timor? Well, I’ll need some Bibles to share along the way, then there’s the multimeter because, sure as eggs, some long lost missionary in the mountains is going to have a solar system not quite working, then there’s the battery drill because when I arrive I’m going to have to hammer drill into a concrete wall to mount a white board (which I also threw into the back of the ute), a toothbrush as I’ll be away for a few days and amongst all this is a data projector which leads ultimately to a scramble for a generator because inevitably the electricity is on the blink … again. 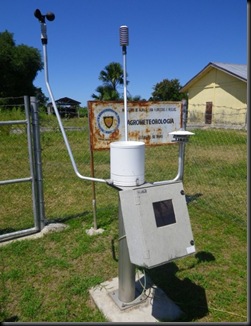 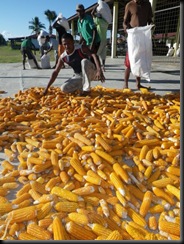 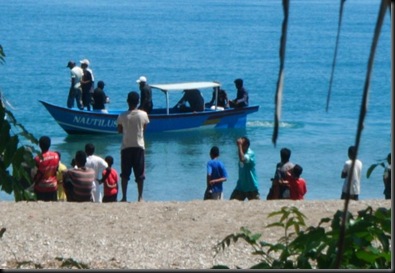