I went on a big 3 day trip to the south side of the island to inspect some corn fields.  This is part of the work I do for an agricultural NGO called Seeds of Life.  My job was to look at their problem of drying corn.  The southerners like to get in 2 crops of corn in the wet season so the first crop has the problem of how to get it dry before it goes rotten.  Basically drying corn is about spreading it out on the ground or on tarps for a few days until its dry enough for shelling (taking the kernels off).  What happens if it rains during those days?  Your crop could be stuffed.  Its sort of important to avoid this.  A farmer can usually cope with this problem with the normal meagre yield but since East Timor is progressing we have the pleasant problem of how to dry several tonnes of corn in one go.  For most farmers groups visited, SoL will provide new large tarps (plastic sheets) for drying.  One group of seed producers is looking at a yield of around 4 tonnes so the plan is to assist them to build a simple thatched shelter of 6m x 20m for undercover drying.  The exciting thing about this particular task is that SoL is not just paying for it but loaning them the finances (aprrox. $1200).  Then they will buy the seed and pay them the price minus the loan. 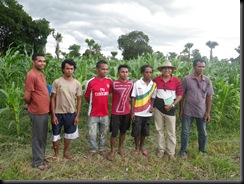 SoL is happy to pay a good price, $1.50/kg as opposed to their normal 80c/kg, so the locals seem pretty happy (4 tonnes would yield $6000).  The reason I like it is that its not just another donated gift.   Being a loan, the Timorese need to weigh up the benefits of the drying facility against the cost that ultimately comes from them.  The ultimate question will be, “Will I lose more than $1200 worth of corn if I didn’t have this drying facility?”  Given that a couple of years ago they lost almost the whole crop due to this problem then  I think it’d be a good investment.  We got to stay in a very well appointed Nun’s accommodation facility while there.  They were also already well stocked with Bibles which made me happy.  The guy in the hat is Budi, an agriculture advisor from Nepal that I work with. 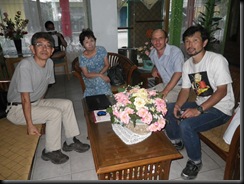 Straight after this I was off again on a two day journey with some jovial Japanese to Venilale in the mountains behind Baucau.  Bit of a bummer as it meant 5 days away from the family.  We drove passed a site in the mountains where 60 years ago, the Japanese forced Timorese to dig caves into the mountains to store artillery to fight the Aussies.  Strange isn’t it – driving happily in a car with a Timorese, 2 Japanese and me the Aussie where 60 years ago our grandfathers fought each other.  Hmmm… anyway, back to the story of doing penance for our sins … This was to inspect a site and meet a group for a small biogas digester.  I had a rushed meeting friday night with a Japanese expert and subsequently changed my neatly thought out design for a digester :(  .  Its a cool mountain location which is concerning as biogas (methane from poo) is best produced at around 33 deg. C.  They put on a very nice big feed on Saturday and since we got no where near finished I’m pretty sure they served it up again on Saturday night (no fridges mind, and no guarantee the beast was killed that day either) and since we still didn’t finish Saturday night, I’m pretty sure they served it up again on Sunday morning – reason being, I’ve been suffering terribly bad diarrhea and have been on the run ever since, so to speak.
at 2:07 PM No comments:

Back In East Timor

Dear Friends,
After 8 weeks in Australia, we have returned ‘home’ to East Timor.  While we were away, the Nazarene Church from Los Palos was able to use our house for accommodation while they attended their national conference in Dili.  So we have a new record for how many guests staying at Sonrei House – 60 people! (O my goodness!?)  Surprisingly, the house looked pretty much in the same condition as when we left it.  Emmy had done a great job.  The cat and dog are still alive.  We didn’t lose any kitchen knives either (highly valued by local women).  I’ve only noticed the loss of the battery drill, one boat roller and the outboard to the boat with its fuel tank.  I’m fairly confident it’ll come back.  Anen, our neighbour, who I’ve been giving construction training to, has won a good contract to build five units further down the beach which is great news that he’s getting out on his own.  The sewing business is still running and considering how to improve advertising and improving the work space.  They were very excited about the certificate they were awarded from last year’s markets and couldn’t believe they were one of only four recipients (we heard that line a few times).  Tobias with the fishing business returned his $200 loan and says the profits are still on their way.  We got the little white suzuki back with a large crack in the windscreen after being rocked on the way back from a Bible Distribution run on the other side of Baucau.  Pastor Samuel is talking about the construction of the fence wall for the Nazarene Conference centre with limited funds as well as developing a Bible Leadership course to train house church leaders (very exciting).  We went to a Korean Ballet which was a bit weird, 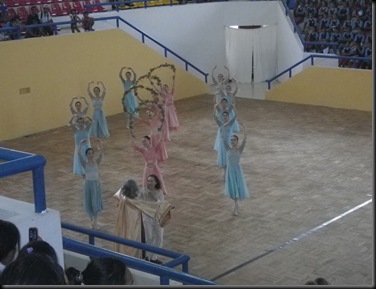 but I feel like I’ve moved up into a new world of sophisticated culture.   I’ve had a couple of meetings with the Japanese regarding their household biogas systems and will travel to the mountains with them tomorrow for two days.  I’ve just been back from a 3 day journey to the south side of East Timor to survey corn crops with Seeds of Life and have been asked to assist a farmers group to build a corn drying ‘shed’ to secure the next corn harvest in April.  We’re yet to visit our Los Palos corn project but I’ve bought a hand cranked sheller for them (to take the kernels off the cob).  Our light truck never sold and the brakes have failed (again).  Bible distribution has begun again with a few being sprinkled across the country during my travels.  Cynthia is back into teaching the kids – the big event being that Serenity will start high school.  We’ve been back for 8 days so it will take a bit to get into the swing of things I suppose.  One of my big missions this year is to give more time to my family – I think its achievable, but I’m ever the dreamer.
We invite you to come over if you can,
God bless,
Samuel
at 8:30 PM No comments: