Towards the end of 2007 we knew that God was suggesting we return to East Timor.   We sent out a few emails, and we had a rather desperate reply/request from the then current AVI (Australian Volunteers international) working with HIAM Health.  She wanted Samuel to assist her while planning and organising the building of a malnutrition Rehabilitation/education centre (lMR&EC.)
I had many and varied fears about returning.  Samuel did a 2 week trip in November to sus out accommodation etc. 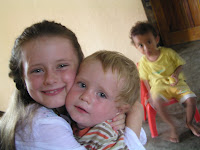 We arrived in Early Feb. 2008.  We spent a few weeks living with a Timorese friend - Rosaria and her family.  A 3 bedroom house with the 4 of us in one room (the first week on one double bed :0), Our friend in the 2nd bedroom, and her two young daughters, toddler son, and two young women (family/housekeepers) in the 3rd bedroom,  2 young men also slept in the front entry/living area. 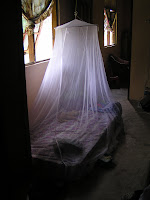 Within a few days Samuel seemed to come down with the flu that was going through the house.  The kids both had a mild fever and Israel had extremely severe diarrhea. (literally rushing him to the toilet every half hour - thank God he was toilet trained early.)  Samuel didn't improve and began to get more symptoms - vomiting, diarrhea, pains etc.  We had been just eating what Rosaria's cook prepared, and Samuel found some of it hard to stomach.   The electricity was typically unreliable, so Samuel was very uncomfortable.  Rosaria felt quite concerned for him, so she rang a friend of hers who lived in the Aussie army compound with Michael Stone (or more recently on ABC Radio).  They invited us to stay in their spare bedroom.  It was a lovely "Australian" home with real bathrooms, kitchen and air-conditioning!
They were so kind to let us into their home, and we thanked God for them.
However Samuel did not improve.  He could not keep any food or drink down, and would vomit up medication (such as panadol).  We tried to get him to sip re-hydration fluid, but he kept deteriorating.  We cried out to God.  I was trying to care for him, still rushing Israel to the toilet all day and night, plus having minor symptoms myself.
I remember walking outside and crying, thinking will I return by myself to East Timor if Samuel dies?  I rang our travel insurance and began to try and arrange a flight to Darwin, however there were no seats available, and he had to literally be dying there and then to justify a $40k airlift.
It was a dark time - Samuel was literally fading away.
Michael's dad arrived from Australia for a few days.  He happened to be an army chaplain, and he came and spoke with Samuel, and prayed for him and anointed him with oil.
The next day we were able to arrange for Samuel to see the Aussie doctor at the Australian Embassy (Embassy website).  He took Samuel into his tiny storage room/cupboard and lay him on a bench.  He stuck a drip into his arm and kept him there all day.  When we picked him up he could shuffle along unassisted! a marked improvement.  He was then able to keep down some malaria medicine, and gradually recovered.  Praise Be to God.


A couple of weeks later we were searching for a place to rent.  We were told the best way was to find an area you liked and walk around asking if anywhere was available to rent.
We found a beautiful beach on the outskirts of Dili, and started to ask.


We agreed on a price and moved in the next week. 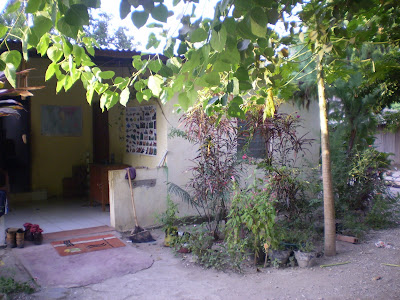 Home sweet home
We lived simply and became like extended family with the neighbouring family group. 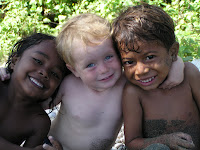 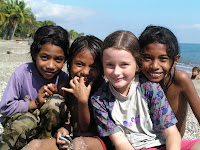 ...and honestly it was just where God wanted us to be. 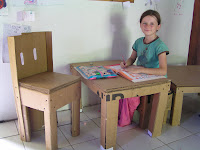 Samuel worked hard, helping out at HIAM Health and doing maintanance jobs for various organisations and missionaries.  We also ran English lessons, bible lessons and began to buy and distribute the available scriptures in the Tetun language. 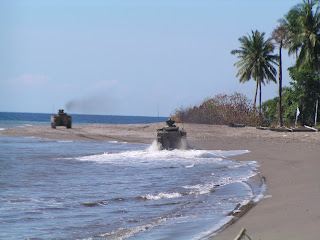 The beach was regularly used by the Aussie army for practice runs. 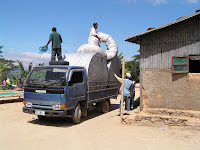 We visited our landlords home village in the mountain, and took up a few items for them including scriptures.  We returned a few times to do a water project there. 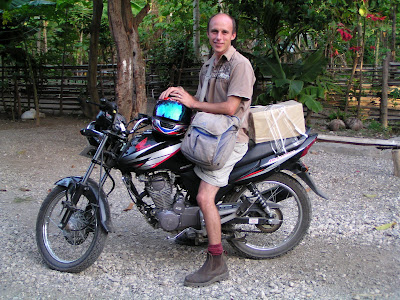 Samuel would travel every few weeks to a new area in the mountains and deliver scriptures etc.  He was able to borrow a motorbike sometimes, and sometimes the whole family (plus a few extras) would squeeze into a borrowed suzuki.
Here is the NEW kitchen our landlord added towards the end of our time there.  It even had a tap and a sink!  The door to the right leads to the NEW indoor bathroom! 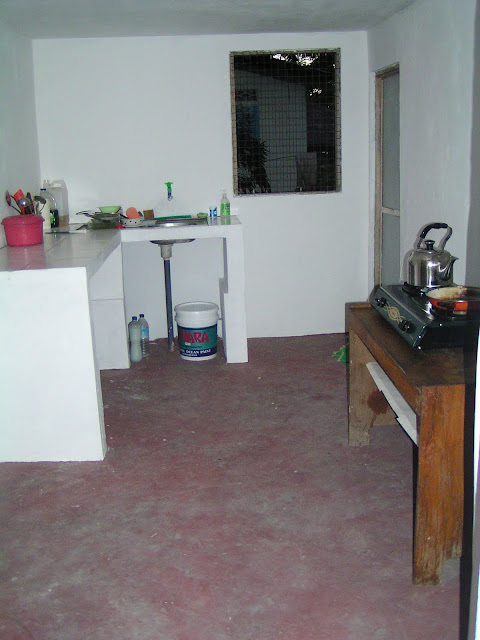 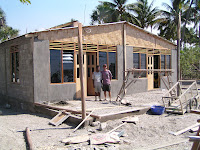 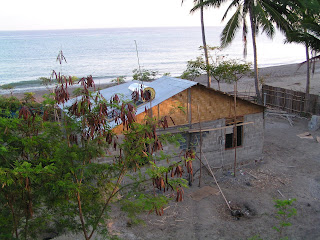 We did a (micro)finance project with our landlord.  He borrowed some money to build 2 small apartments on his beach front land.  Samuel gave lots of advice and help in building them to generally suit foreigners.  Now he rents them out for a hefty sum and pays us back with half the rent.  The other half he is banking (we helped him set up an account), and he plans to use it to send his boys to University. 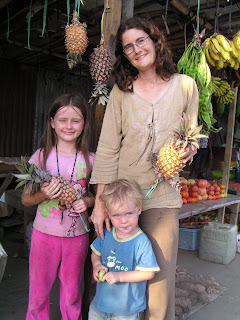 Here I am at a road side stall with some of the nicer food you can buy.  There are always bananas, tomatoes, cucumbers, lettuce, a wide variety of green leafy veges (YUM), long beans, short beans, potatoes, sweet potatoes, garlic, red garlic, paw paw, pineapple, carrot etc etc. 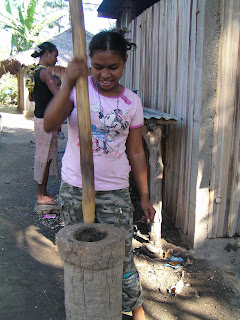 This is Nilda.  After 2 months living there, we realised that the landlords were really hoping we would take her in as a "house keeper" and pay for her school/living costs.  I guess in a nice way you could think of it as a boarder.  But really the girls there are farmed around a bit as "slaves" to various relatives.  We decided to take her in on the condition that they would accept us treating her more like a daughter/sister.  So I tried not to let her do too much housework, but hey when she gets up at 6:30 and sweeps the place before I'm out of bed what can I do?
We really grew to love her like family, and she was so helpful in many many ways - explaining culture, acting as a mediator, caring for serenity and Israel, and helping with housework. 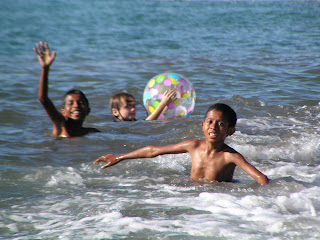 This is Siku and Domingos, our landlords twins.  They were 12-13 when we lived there in 2008 but acted and looked more like an 10-11 yr old Aussie.   Serenity became great friends with them and their younger sisters. 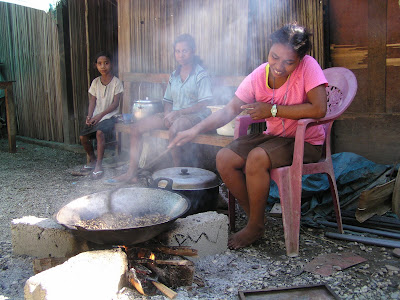 Nilda helped us prepare some coffee, which had come from a mountain village.  We auctioned it off to people on our mailing list, and Awesomely raised over $1000.  Enough to purchase pipes etc for the water project.  PRAISE God, and thankyou to the buyers! 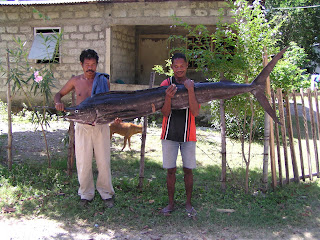 A mammoth fish that "walked" past our home. 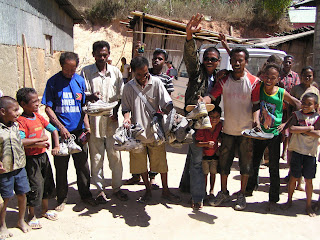 One day Samuel got a call from the Sallyman at the Aussie army base.  He explained how a NZ army "group" had to leave the country and couldnt/didnt want to take their dirty boots through the airport.  He was wondering if we would be able to distribute them somewhere.  We said "of course" and Samuel went to collect them. 3 boxes of boots and sneakers.  However lots of them were very large compared to the average Timorese man.  Despite that we took them all up to the mountain on our next journey and found a cluster of houses that were very excited to receive them.  Of course like any third world village most people don't own shoes. 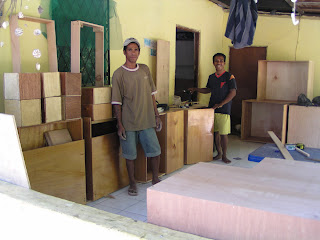 Samuel had a number of requests for cupboards, so he employed and trained two local young men to help make them.  They also fitted out a couple of mobile libraries with drawers and shelves. 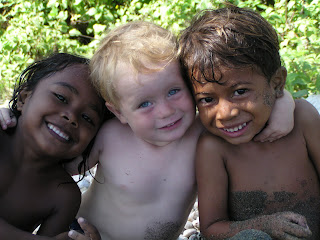 These were Israels little buddies - Asika, and Isu (cousins) 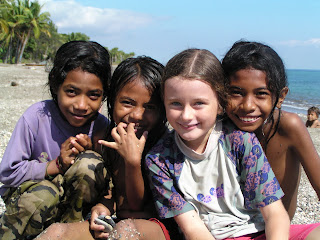 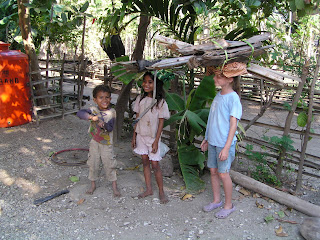 Serenity had a go at helping collect some fire wood.!! 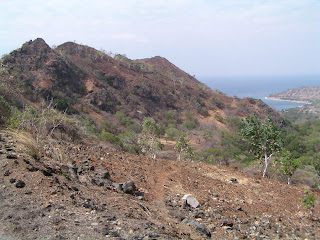 A lot of the landscape is pretty barren and dry - surprising for a "tropical" location - but due to a number of factors.  War/fires, greed for timber, necessity for firewood to live. 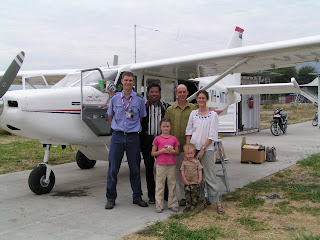 This is Brad (MAF Pilot) and Sr Carlos (bible translator) with us, about to fly to a remote village to distribute the scriptures in 2-3 locations. 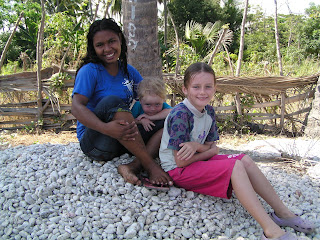 Nilda became like a big sister/aunt to the kids.  She really loved them and cared for them, and was very kind.   She helped them with language and explained cultural processes and customs. 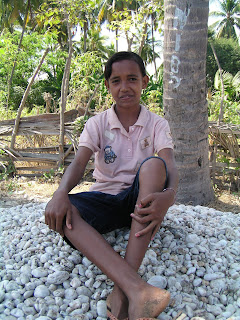 One day Rosaria asked us if I would be interested in being a God-mother for a poor child.  Her mum and dad were hoping a foreigner would take on the role in the expectation of long term support (read money if you like).  When we went to meet her (Julianna), to consider the request, I felt God challenging me with the notion that what right do I have to say no?.  They were literally in poverty, and here they were asking for help in a way that was a little more  acceptable than begging.  So I said yes.  We explained that we were not catholic, but that we loved and followed God, and that I would pray for her and encourage her in her walk with God. 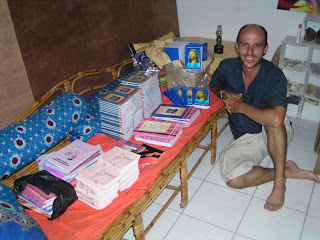 A collection of some of the publications we were able to get.