﻿﻿ ﻿﻿
This week it seems we have just been going along on our mundane normal life. Not many interesting stories to tell. Just the same old, same old. We get our runs of sickness such as diarheao and headaches etc. The kids are doing well although they seem to be suffering from not getting enough dad-time. We got our first (and only) bit of mail this year from the post which I thought was a bit of a miracle. I bought up the whole supply of wholemeal bread made in East Timor that I know of – all two loaves.
The community work is progressing. Now that they are getting the idea that we are coming back, they are starting to talk about ideas to try. Simeao took seeds, buckets and watering cans to Tibar to help the growers get going.
The community in Maquili is a bit uncertain about doing a chicken pen project so I have decided to run a chicken pen at our own home and see if we can make it economically viable before moving the business to them. We hope to source materials and chooks from Maquili.
Beraka are slowly getting the idea of the importance of water and are planning to build a holding tank towards the top of the line. We are helping with design and transport of materials.
More drums are going up to the farms to store corn safe from rats and grubs.
The beach house project is going well although a little behind schedule.  We hope the team coming can stay in the first unit next week.
A team is coming from Darwin next week which we are looking forward to so we’ll spend a bit of time preparing for that – I’m cooking up a bit of an adventure for them. Stay tuned…
The sewing room is going well and Cynthia is putting a new girl on next week. The challenge now is to find some buyers for the products, especially some organisations who think the women’s product is worthwhile.
God bless for now,
Samuel

Click on this video to check out village life (about 4Mb)
This week we have put on some new “staff”. Sounds all official, but really I wonder if we are just mucking around. Cynthia has found a great young woman called Sinta for the sewing room. Cynthia finds it hard to teach in a group setting so she has taken on Sinta as an employee to work in the sewing room. We hope that she’ll be confident enough to become a coordinator of this project and bring in other suitable women to be able to sew products. This week they have been working on women’s products as well as sewing up bags for school kids to carry their books. Cynthia is working hard on the numbers to try to make this a financially viable endeavour (so it pays for itself). Serenity is also proving to be one of the best sewers amongst the women. She is even on the payroll (is this child labour?). 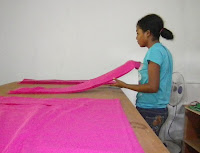 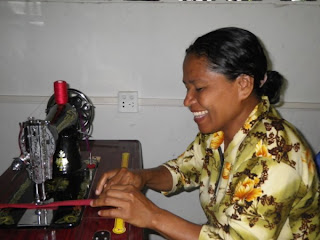 I have put on a guy fresh out of uni to do community development. His name is Simeao. It’s a new area that we are going into and sort of riding on the back of water projects – its like the next step after getting water into a community. My hope is that if he can carry some of the responsibility, training and implementation then I can be freed up to do other stuff. (I get a bit busy.) I introduced him to the community of Beraka and we had a long talk with the community about why the water system is not going as it should. It seems there’s just one man at the top of the system who wants the water to go his way and to no one else. Pray for him. We have organised for the construction of a small dispersal tank to hopefully deal with this problem. They have a serious problem with evironmental degradation – many trees are being cut down for firewood and the creek has caused massive erosion in the last wet season covering good land with river rock making it unusable for crops. There are some good opportunites to provide seed and we are considering a small loans project to get in some vegies to sell to market. Simeao and I also went to his home community of Maquili on the island.
It’s a fascinating village. They make awesome fish traps and seem quick to learn and try new things. They are already implementing some great ideas such as diverting precious waste water into banana and paw paw gardens and using quality composting toilets. I negotiated with one man to provide a $400 loan to build a chicken pen as a small business endeavour. All going well, he can sell chooks or eggs and pay back the loan over 2 years. Part of Simeao’s work will be to monitor this area of microfinance as well as provide education for the communities. (No harm in dreaming.)
The beach house project is still going ahead. I put in a couple of days to give them a boost on the roof – it’s a bit technical with valleys and hips. We’ve put on another builder to help with this work. We hope to get one ready at least for a team coming in 2 weeks from Darwin.
Scriptures are slowly getting distributed on an adhoc basis. We are also getting out our little activity book designed for primary school kids. Its been pretty exciting but unfortunately our wizz bang new printer is being very temperamental. We got it rigged up in a dodgey sort of way to external ink tanks so it seems the ink ink is running out externally everywhere!
Our truck made its first trip into the mountains this week to deliver drums to farmers for rat and weavel free storage. This is the work of an organisation called Drums on Farms. We are assisting with transport. It’s a two way street where they get cheap transport and we get enough money to pay for fuel, a driver and extra money that will help keep the truck maintained for all the work we do. Anen is training up a young man to take on the role of driver which we desperately need to free up both Anen and I. His name is Natalino and I hope that he will be also able to drive Simeao with supplies to community development projects as well as (dream big) support a vegie run to bring all those wonderful vegies from the community to the city.
It’s a big plan for a little guy. I suppose its just a little plan for a big God.
We finally got a tap rigged up to a basic water dispenser. Israel is fascinated with this contraption from which you can just put your cup under, turn it on and get a drink.
God bless, enjoy your week. Be grateful if drinking water comes out of your tap today.
at 9:15 PM 3 comments:

It has been a difficult and emotional time for us in these last two weeks with the sudden death of our good friend Maun Je. Personally, I really felt the need to wind back a number of our projects and just spend time with the family group we live with who have lost a good friend, brother, father – basically the patriarchal leader here. You may remember that earlier this year we lost another father to alcohol related liver damage. There are only three houses in our ‘cluster’ – of the three families, two of the men have died leaving behind two widows, 9 children and about 10 other young people (from their mountain families) being supported through school. All this responsibility rests in the hands of the last remaining man – Anen, a 27 year old young man with his own wife and two young children. I have been slowly growing to trust and admire Anen over this year, being the neighbour on our other side.  Now as we stand side by side at our friend’s grave (right outside our front door) our friendship is forged stronger. On top of all this, we are in the thick of an investment project with Anen that is literally dramatically life changing for them in terms of finances. The problem is that Maun Je was our head builder. He was the sort of man that, when he walked on site, you could breathe a sigh of relief knowing that everything was going to be ok.  Now he is gone we must find strength in Jesus, that great and humble builder, the one who is always 'onsite'.   I believe that when someone dies, God knows whats going on.  Its just that I dont.  But I trust in Him and know that it is no good sitting down.  We must stand up, thank God that we are alive, pick up the tools and go back to work.  A number of Aussies have visited us in the last couple of weeks.  We thank God for them.  It is because of their encouragement and other donations (for which we are truly grateful) that we have decided to to get organised and become a more determined force in our struggle for people's lives here.  As part of this "getting organised" we have decided to appoint coordinators over various areas of our work and take on 3 new staff (we currently employ around 4-6 people).  With God's help we will rise from the ashes with a new resolution.
at 2:55 PM 1 comment: