The last week in East Timor was hard work.  It always is after you’ve been going at it for several months and you’re trying to tie up projects in preparation for departure.  Firstly, we should continue Cynthia’s saga with the late night boogie dancers.  It seems as though two weeks of dancing through the night is just not enough.  Although not continuously all day and night, our neighbouring party animals were going hard and loud long into the night for the third week and Cynthia had had more than enough.  So Cynthia, all 82 pounds of intimidating beauty went out into the night … 2 am … alone … to meet her destiny.  Now it happens that the main switch to the power (including loud speakers) is on our side of the church building.  Sneeky Cynthia went up and flicked off the switch and shuffled back home before getting caught.  All was silent, with Cynthia peering out on the dark scene from the safety of an upper window in our house.  She thought she had won when, after a little while, a light bobbed around the corner and flicked the switch back on again.  Drat.  Hmmm … Plan B (note that samuel would surely have been a little more valiant had he not been fast asleep).  So Cynthia, feeling bolder from her previous sortie, decided on a new manoeuvre.  She walked back out into the dark and walked right up to the boys who were fast asleep in the middle of the amplifiers which were all pointing outwards blasting the music across the village.  Nervously she turned the volume switch and it quickly dropped to silent.  One of the boys stirred so she sweetly explained that she couldn’t sleep.  So he just said “Ok” and went back to sleep.  At last the torture was over!  In fact, that was the end of it!  They decided they were over it and didn’t need to keep everyone up night after night anymore.  Hallelujah!

The main job for Samuel was to get the units finished which after lots of hard work and pushing the guys we finally got them completed.  Though the exterior paint was still wet on the last day of work.  He built and installed the solar hot water system and installed the solar pv system (electrical) to one unit and set up wires and materials for the other two to be installed by the now trained Timorese.  Samuel always thinks they are quick learners. 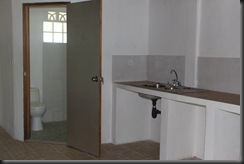 Thankfully, on the last day before leaving we finally confirmed that we had a tenant for all three units.  He’s an Aussie bloke who cared for me when I was very sick in 2008.  He works for the government and if I revealed too much more of his identity then I’d have to kill you, so I’ll spare you the details.

I think I forgot to mention that somewhere a month or so back, the little white suzuki featuring in our history of work in water and Bi ble distribution has been very generously donated to our work.  It is our sincere hope that this little beauty can deliver many more Bibles to the Timorese people before it reaches retirement.
Another interesting turn of events was that we bought a boat this week!  It was an offer of a quality boat too good to refuse and should prove very valuable in helping the Timorese.  Without inspecting the boat (a minor detail) I agreed to buy it and actually never saw it again after the money transaction of $900.  I immediately entered into a contract with another young Timorese fisherman without even talking to him.  He will rent the boat on a monthly rate so he can use it to catch more fish than he usually would in his little dugout.  It perhaps seems a little foolhardy and it probably is.  I hope to return back next year to find this a successful proposition.  I am still naive enough to believe it is better to trust and take a chance than not to try at all.  You can judge me later on this. 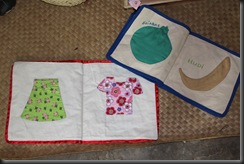 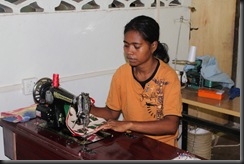 Cynthia has received an order for her ladies sewing group to make simple cloth library books to assist in literacy in a library in Gleno.  This is a new, exciting and very creative opportunity on top the women’s products that the Timorese ladies are producing.  Also on our brief stopover in Darwin we met a very encouraging lady.  She has now  approached some government connections in the Northern Territory with the possibility of providing reusable sanitary pads to Aboriginal women in remote communities.  Its all quite new and unknown but just the idea is exciting enough to write about.

So after some sad farewells we finally shoved a few belongings into our bags and left our friends and projects all behind in East Timor.  We shall see how it all pans out when we hope to return in Jan/Feb next year.
We had a great stop over in Darwin for the weekend reuniting with old friends from almost 10 years ago and getting our first opportunity to share our work with two Darwin churches.  They were very encouraging to us.  Some of them believe that God is asking them to help East Timor.
We finally got home to the grandparents.  Samuel pretty quickly came down with a convincing round of diarrhoea and Cynthia is now suffering with a yukky fever.  She went to hospital for blood tests which we are waiting on mainly to cancel the possibility of malaria or dengue.  Israel is getting over his boils and Serenity appears fine.  Cant complain really, drinking water comes out of the taps in Australia and you can have a hot shower (and even drink the shower water if you want to – lucky country).
We will probably not update the blog with news for some time as most of you know that life is pretty mundane in the lucky country.  But Samuel is cooking up a little miracle with the Lord.  Problem is, its so darn crazy he’d prefer to keep it a secret until he pulls it off (with a lot of help with God).
So its good to be back … in Australia!
God bless, Samuel
at 8:49 PM 1 comment: