How We Distribute
In distributing bibles, we are not intending to push any specific denomination.  We operate in a support role to the Christian faith that exists in East Timor.  Statistically, East Timor is considered to be 95% Catholic.  This means that most Timorese know about God and Jesus and Mary and celebrate Christmas and Easter.  I would estimate that around 15% of Timorese would have some form of Bible
We distribute Bibles in a number of ways usually from person to person or in small groups.  The giving of a Bible is usually accompanied by an encouragement to read it every day to get to know the God that they believe in.
We supply bibles to members of different churches/organisations including:  Catholic, IPTL (Timorese Protestant), Presbyterian, Assemblies of God, Seventh Day Adventist, Nazarene, WEC, YWAM, Baptist, Potter's House, Jehovah's Witness, a lovely Bahai woman. and others (sorry if I missed you here).  We have also distributed in villages, schools and orphanages.  Sometimes priests, pastors and youth workers come to our base in Dili and sometimes we go out into the mountains.  We have even sent bibles to Timorese in Europe! 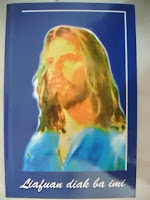 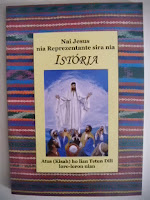 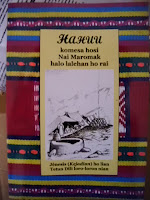 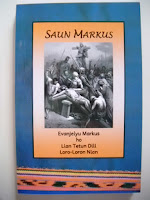 We also print an activity book to go with the gospel of Mark with 16 lessons designed for use in school or church groups, cost 60c (for paper and ink)


Wycliffe also produce some scriptures in the language of Tetun Terik.  We have just begun to access and distribute these.  The language Tetun Terik is spoken in some districts of Timor -such as Suai and Viqueque.

Jehovah Witnesses have also recently produced a complete New Testament, which has some lovely maps, a decent concordance and a Bible terms Glossary.  Its available for download:
type Tetum in the language drop down menu at this page

At present there is no full Bible translation in any native language of East Timor.  A small proportion of Timorese people can read Indonesian or Portuguese, but not many own a bible in those languages.

The Wycliffe Bible Translators team is made up of a linguist and several Timorese translators.  Together they are working slowly through the translation of the New Testament.  So far they have translated and printed Mark, Acts, Genesis, James and some of Paul's letters.  Luke has recntly been published and other books in the NT have also been translated but are awaiting checking before publishing can happen. 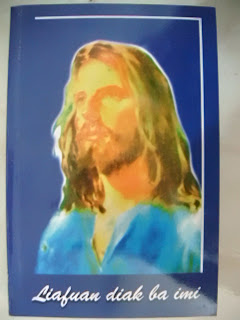 The other main Scripture we distribute was translated by a Catholic Priest Fr Rolando Fernandez SDB - a Filipino priest from the Don Bosco Centre.  This is a complete New Testament translated in a more literal style and has recently had a revised version published.  These are available at some book stores.  We also stock boxes of these and can assist in accessing bulk amounts. A box of 60 is usually $180
.
His version can be also be found online here: tetum new testament bible - Padre Rolando Fernandez


Here you can find an online recording of Mark:  recordings of Mark in tetun

Also globalrecordings have produced a number of mp3's which they offer on their website.

Not directly related to the Bible, but have produced some lovely childrens readers, as well as some cds of hymns etc

If you'd like to be a part of this, you can transfer funds into our account, referenced: "Bibles"