Although we have experienced some disasters we give thanks to God that we are alive and together as a family.  The floods have been so devastating for some people.  Our house is near a little town on the Pacific Highway called Ulmarra.  The town was pretty safe from the floods as it only just managed to come over the levee wall at a trickle.  Its still pretty scarey though because the river is about 800m wide in this area and the levee wall is about 3 feet high near the pub.  Its a very powerful scene to see this water rushing by and starting to bubble up through the ground around your feet as the massive volume of water presses right through the pores of the levee wall.  Our farmhouse was not so protected as the water rushed over the levee wall at about 30cm deep all along the 300m of river bank - a rough calculation means about 100 tonnes of water going through our property every second!  Our farm is on the outside bend (the erodable side) of the river.  So even though the wall has held for a number of floods it is always a matter of concern for us.  But we thank God that the water came to only 15cm below the floorboards of the house.  Even though we lost a bit of fence and possibly a wheelie bin we are very happy that the farm survived.  In another life, Samuel is a member of the NSW Rural Fire Service so he got busy (surprise, surprise) with the clean up. 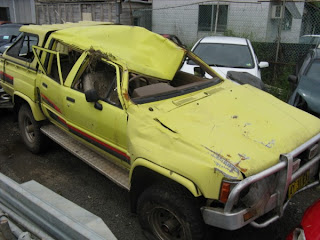 Disaster.  Christmas day we were taking a large load of scaffolding from the building site back to the builder about 100km away.  We were doing it on Christmas day because Samuel's family lives up in Lismore where the house is being built and Cynthia's family lives down south near the builder.  Dumb idea.  It was raining and coming down a hill Samuel lost control, we left the road and slammed into a large camphor laurel tree, rolled and finished up upside down on the road.  By the grace of God, we all lived.  I am still a bit surprised.  We all climbed out of a rear window that had smashed and hugged in the rain with blood running down onto our clothes.  Its a hard road sometimes. 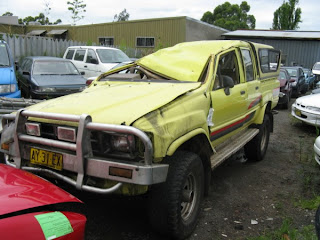 As you can imagine, the whole thing has shaken us up a bit and rattled our nerves.  We look to God for strength and wonder sometimes at how to go on.  Samuel feels pretty bad about this.  Just for your interest, we actually really loved this car.  Samuel used to make his own fuel for it - yep, it was a veggie oil car.  Samuel would filter out the chip crumbs and pour the veggie oil straight into the 2nd fuel tank.  We had many great adventures in this car.  But I have learnt that we should be thankful for what we have got and not be too sad about what we have lost.  I am so thankful for my beautiful and courageous family.  Hallelujah.
at 8:17 PM No comments:

Like every body else on this planet, we don't actually have a singularly obsessive focus on one thing i.e. East Timor.  I am not sure whether this is good or bad, but I know that it is exhausting.  Two years ago, I hatched a dastardly plan to try to help my father find a better place to live.  I got a teaching job for a year (which is another story) and found that I could get a loan to buy a house.  Loans are scary things and one of the major means by which we are trapped into a rather less-than-spontaneous mode of living otherwise known as "the rut".  So, in order to avoid the rut, we bought a house with the plan to build a second house with the idea that they could both support the now too-big-to-mention loan and my dad could live for free on the land.  Sounds noble, but in reality, psychotic.  The whole thing grew into a voluminous financial and bureaucratic mess.  Step in, God, please.
So God decides to rock up on the scene of this disaster around June, 2010, halfway through our stint in East Timor.  True to form, he took all our stuff and is trying to turn it around for good.  We were approached by an organisation who would like to take on the two houses and use them to accommodate needy people.  The hope is that it will pay for itself and we can return to what we do in East Timor.  To make this a reality I need to work my little butt off and get the new house finished.  In the back of my head I am trying to remember that it is God who builds things and that I must trust in him.
at 8:01 PM No comments: