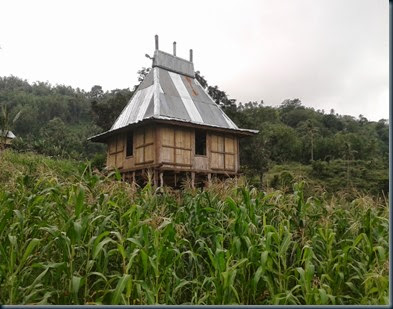 A spirit house called an “uma lulik” looks over a field of corn in the mountains of Luro, Timor-Leste.

Right now we are in the middle of the wet season.  It still doesn’t rain all that much where we live – the north coast of Timor-Leste is a comparatively dry location.  But up in the mountains and on the south and east it can rain heavy every day for an hour or two.  By now, all the corn is in and rice planting is under way. 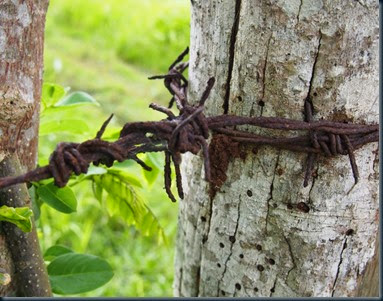 How old is this rusty barbed wire?  About 3 years. I put it in with my mates from Oz.  The quality of the steel is so poor it has snapped in some places. Just one of a long list of reasons that keep these guys so poor.  The barbed wire was twice the cost of barb in Oz which will last 50 years before it looks like this (note that the fence was never burnt which destroys the gal).

Last week I got the opportunity to visit Lino, my corn farming friend, and our test crop of corn. 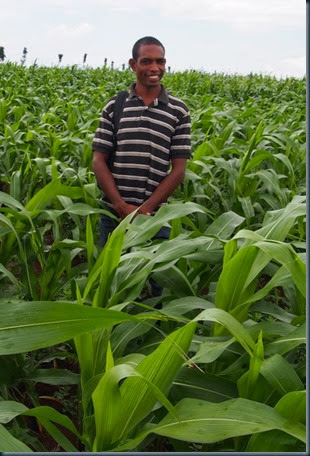 This crop is the first one that I was able to be on the farm on planting day to help out. Probably the single biggest issue he faces is getting plant density right – that is, the number of plants in every square metre.  Research shows that the best density is around 4-6 plants/m2.  When I first met Lino he was planting at around 1 plant/m2.  Its not just a matter of rocking up and saying, “Plant them closer!”  You’ve got to be persuasive and convince not only one farmer but the whole community since they make decisions at a community level.  In fact, after 3 years of working with Lino I’ve only managed to get him to raise the plant density to 2 plants/m2.  I guess I’m not very persuasive.  This year, I decided it was time to be on site on the day and work alongside Lino targeting 5-6 plants/m2.  The corn is looking great after 6weeks in the ground but its still early days.  They’ll still need to battle it out with white grubs eating the roots and the possibility of strong winds flattening the corn. 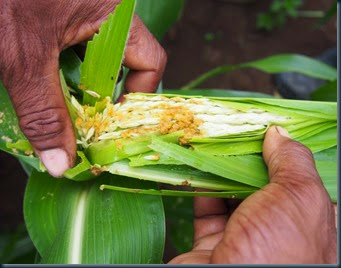 Some green grubs attacking the young flower at the top of the corn plant destroys the pollen needed for the cob.

The good news is that there are plenty of corn shellers now out in the country just itching to shell corn. 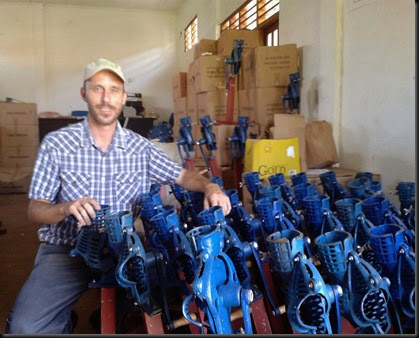 Yours truly with a bunch of corn shellers ready to roll. Anyone working with corn in a developing country should grab one of these!

Apparently those yanks have been using this thing for a century or two and keeping it all to themselves.  Since the corn shelling job has been reduced, corn husking is now the big task.  We don’t have good quality leather here so I’m going to try to fashion one out of an old car tube and some scrap metal.  While working on my new invention, Israel says, “Why do you want to make that? pulling the husk off a corn cob doesn’t take long!”  So we did the maths, say 15 seconds to pick up, de-husk and bucket a cob.  Say Lino has 1.4 ha at 2 cobs/m2.  Thats 28000 cobs.  At 4 cobs a minute, 240 cobs/hr, say 2000 cobs per 8 hr shift.  At that rate, it would take 14 days.  Increase your plant density and you’ll be husking corn for a month.  So its time to get inventing and reduce the work load.  Stay tuned…

First though, I had to get back home to Cynthia.  While we wait for a fast flowing river to go down, a bus makes a daring attempt to cross the causeway coming dangerously close to the edge.  You’ll be pleased to know we waited longer before crossing. 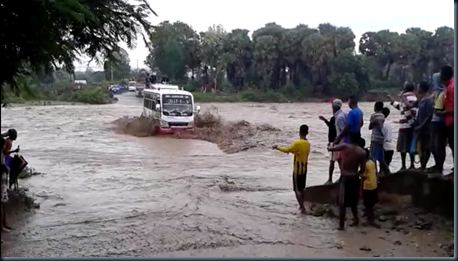 Unfortunately, things haven’t been going well for Cynthia and the pregnancy.  She’s been finding it hard to breathe with tight pains in her chest.  We ended up visiting two doctors.  We are banking on it being muscle strain creating chest pain and resulting in oxygen deficiency.  A bit of paracetamol and “tiger balm” appears to be helping.

Pray for stability, there are multiple road blocks trying to catch a “revolutionary”.  The Prime Minister is “reshuffling” his government, and just for your entertainment, I mention a grenade lobbed into a US compound, I mean, why?  The yanks are nice aren’t they?  They just let us steel the secret of the corn husker.