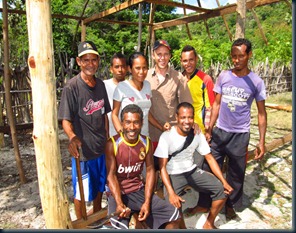 On Saturday, I got up at 5am to head off to Atauro.  The main plan was to check on the progress of the construction of the first cabin for “Emmy’s Place” – a low key tourist accommodation set up. A friend called Dan came with me and we loaded up 6 more drums from MAF (for corn storage) and 2 bags of cement.  I took a bunch of tools ready for a big day’s work.  On the way we had to pass through a pod of dolphins.

Before getting to the beach we leaped into the water for a bit of a snorkel.  Atekru has some great little crevasses to dive through (with a big lungful of air).  Got to see flashing fish again, and flying fish come standard with the journey.  I was surprised to find that the locals had already started building the cabin with local timbers.  It looks great, and they followed the design well except that they forgot the veranda – oops.  And so ensued a long discussion about how they’d forgotten the veranda, and then some more talk for quite some time about the whole thing and finally after much discussion in their local language they came to the conclusion that they had indeed forgot the veranda. 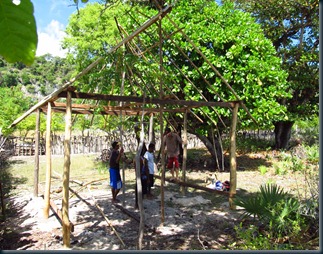 Amongst all this the conversation variously skirted around how the roof line would need to be extended and the possibility that the cabin could be a little short for foreigners and how the flooring would be completed.  But in the end, they had to concede that the veranda was forgotten and that meant we needed two more posts.  Two young fellows were immediately dispatched to bring back some posts.  Occasionally, I’d offer to dig a whole for the posts but got the feeling that I shouldn’t rush into such an ambitious task.  After 1 1/2 hours, two sweaty boys returned with a rather heavy post which had to be trimmed and shaped before being considered worthy for the cabin. 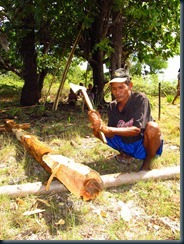 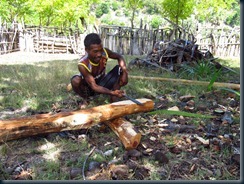 I could see that this was not going to be one of those days where I was going to achieve an incredible amount of construction.  But in some way it felt ok, that the main reason for being there was to encourage these happy people.  By this time it was definitely lunch time – a meal including local pumpkin and octopus with morungi leaves and some sort of bean.  (If you haven’t heard of morungi its one of those wonder foods you’ll have to google) 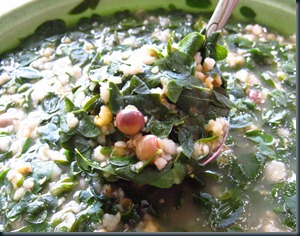 After lunch it was decided that we’d find the second post so we set off with the happy Atekruans into the bush and made our way through the rocks at the base of the limestone cliff.  In a gully we had to scale a short but technical little cliff which was a bit slimy.  Dan particularly struggled with this.  In an effort to encourage him, I pointed out a large her 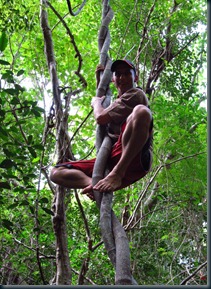 mit crab who was also climbing the cliff near his hand, and said, “Look at the crab, just follow what he’s doing!” Unfortunately, at that moment, the crab lost its footing and after bouncing a couple of times down the cliff face, plunged to its doom … oops.  Fortunately, Dan decided not to take my advice and after a nervous moment made it to the top.

A straight log was duly located and trimmed in the forest.  This is a technical procedure carried out in an attempt to make the log straight by trimming the outside of any curves (I actually like curves).  It took a very long time and Dan and I considered looking for another log as this one looked like it was going to be trimmed down to a pile of wood chips.  Eventually, it too was deemed worthy and we took turns to haul it back down to the beach.  Back at the building site I suggested we might stand up the posts but no, the day was getting on and besides, wouldn’t it be best to let the posts dry out for a few days?  So, that's building in Atekru.  I wouldn’t exactly call it efficient but who would want to be efficient when you can have so much fun being inefficient? 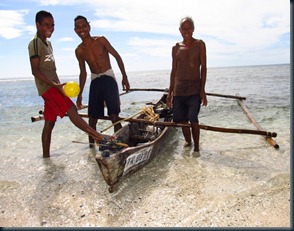 Dan and I decided that rather than attempting anything else of a practical nature it would be much better to go and have a snorkel and photograph the sunset just so you could see it too. 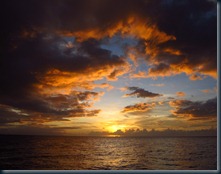 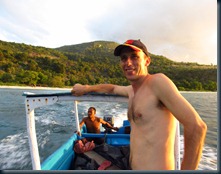 We finished the day with some corn and fresh fish – we had to try it boiled and fried to be complete. 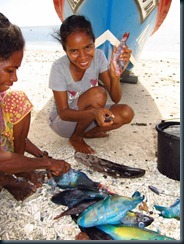 So I didn’t ‘achieve’ much in terms of building but felt that these island folk had taught me better how to value relationship over achievement.  This day was so good I am not sure which part makes it perfect but I left the island wondering when I could get back there to do basically nothing all over again. 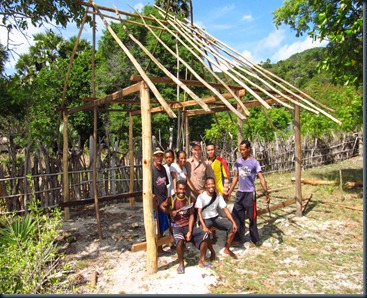 Great post! Loved the dolphin pod. Seems like one of those days which is more memorable than productive, for all the right reasons.