Liquidoe School gets a big boost 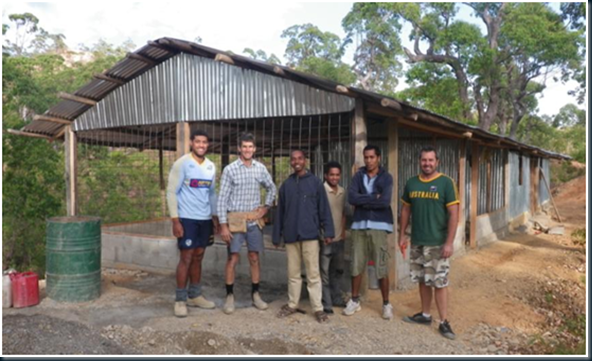 After a long time of plugging along, the school final got a big boost thanks to the effort of 3 guys from the Gold Coast:  Rob, Mat and Pelay.  Rob is a carpenter, Mat a roofer and Pelay also works in construction.  They made a top team.  The job was to try to bring the school building up to lock-up stage in an effort to start using it.  They raised funds to pay for materials and loaded up a yellow dump truck to get up the mountain.  Its not far from Dili, maybe 30km, but it took them over 3 hours to do the journey.  That should help you understand the terrain.  As it was a single cab taking other Timorese, the guys had to sit up on top of sheets of reo laid over the top of the truck – we gave them a mattress to make this bit a little more comfortable.  One of the big bonuses of this team was that Rob speaks Indonesian which reduces the need for me to sort out as much stuff for them.  The guys were able to lay the slab for the 20x6m building, close in walls with mesh, put on doors, seal off windows and make a little loo. 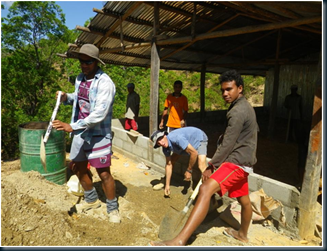 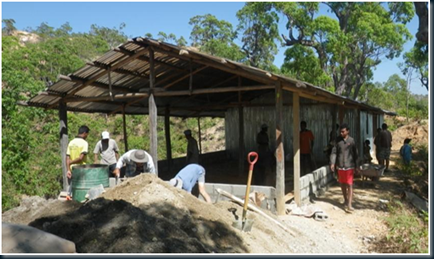 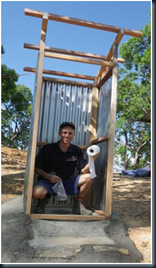 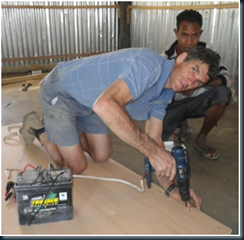 Samuel hard at work on the left.  Rob with samuel’s battery drill – an old ryobi hot wired to a car battery (we were desperate).

We had a bit of an issue with some of the locals being angry about the work taking place.  I hope that this can be sorted out.  Please pray for Mateus, safety and the school.  The next plan was to get the school furnished.  After finishing up this work, I got a call from Jill in HIAM Health with a large load of school desks.  She set aside 130 chairs and tables, some filing cabinets, teachers desks and notice boards as well as stationary supplies.  These were trucked up a couple of days ago.   Just another one of God’s miracles – its like its a daily occurrence here.  He still amazes me.  Mateus says he has 125 kids now.

As an aside, I have been panning a reroof of the local Catholic Church in our village.  It was in desperate need of doing.  I have found that due to all the needs around the country that I often overlook my own village.  They are actually better off than many mountain folks so I tend to put them down the priority ladder.  Anyway, it came time to do something before the next wet.  We ordered the material and God ordered the skill.  I didn’t know that Rob’s mate, Mat was a professional roofer!  They came back from Liquidoe with a couple of days to spare and thats all it took to get a professional finish on the Church roof.  It looks sensational – Mat did a great job! 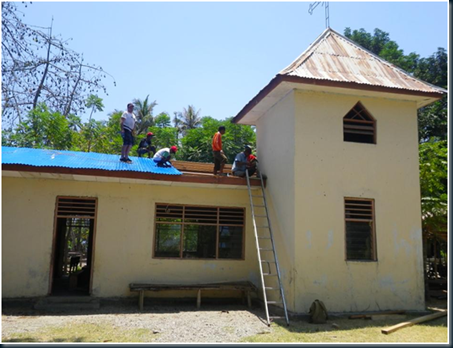 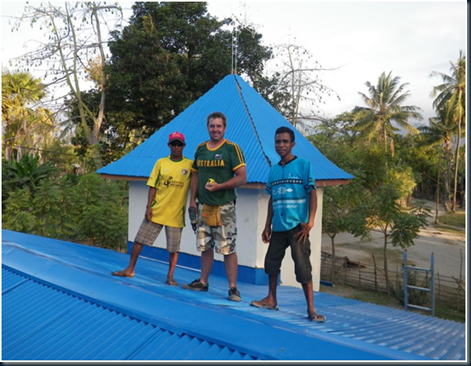 We thank the guys for coming and being so generous and caring and the spiritual input they had into our lives and the lives of the Timorese.