If you’re outside East Timor – a presidential campaign probably means the daily press coverage on who in America will be voted in to try to be voted in to try to be the President of the United States.  Here, in East Timor, we have our own presidential campaign going on to see who will be the next president of East Timor.  And just in case you missed the news (or just in case the news thought it wasn’t important enough to mention) I’ll let you know that the vote for the President will happen on this Saturday, 17th of March.  Should the news have let you know?  Perhaps if you were in Australia it could be worth being informed about but I’m sure some latest drama about which celebrity kissed which celebrity is more important.  We had our final campaign day yesterday which meant mainly seeing Fretilin, one of the big old parties, filling up trucks with young people chanting and clanging away as they drove up and down the streets.  They spray paint their bodies in Fretilin colours and lash large Fretilin flags to small scooters and tear up and down the main drag.  Very noisy and slightly intimidating.  It was nice to see a good Timorese military presence casually strolling up the road picking up garbage to tidy the place up – nice initiative.  The Aussie troops have been steadily coming into the country to be ready for any “action”.  We had grand plans of stocking up for trouble – buying a bag of rice, filling the gerry can and discussing an escape plan.  Our general plan is to load ourselves into our boat and head for Atauro (the island).  And thats about where our preparation ends (the gerry can is still empty).  This is the first election the country has had since the crisis days after 2006.  Back then, their was a lot of bloodshed and IDP camps.  I care far more about a peaceful process than who might get in.  The general response I get from the Timorese is that the candidates are generally just interested in themselves and looking after their own family, friends and connections.  There is not a lot of hope for significant and uncorrupted progress in the country.
Some of the main candidates are (from my extremely uneducated or possibly falsely educated view): 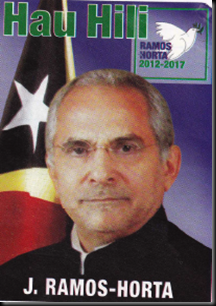 Jose Ramos Horta – the current president, winner of the Nobel Peace Prize, and well recognised leader being the man on the diplomatic front fighting for East Timorese independence.  He was shot in 2008 and nearly killed by Alfredo Reinaldo’s men who were leading a small rebellion (Alfredo was shot dead by Timorese security when he came to the President’s house).  He lives on and has created a marketing campaign for Dili as the “City of Peace” over the last few years.  He likes driving small fancy cars like Mokes.
Lu Olo (Fretilin) – Fretilin is the original political arm of the Falintil which was the army fighting for independence.  I guess they see themselves as deserving the leadership position since it was because of them that the country is free (in their view).  They stick up for the rights of the veterans who should be rewarded for their bravery.  Lu Olo won the first round of elections in 2007.  They are big, aggressive and loud and I think this works against them to some extent amongst the people.  They like to remember where they have come from but many people want to look forward to what the future holds.
Taur Matan Ruak (“Two Sharp Eyes”)– the former defence force chief, he seems to have the support of Prime Minister Xanana Gusmao.  I remain largely uninformed on this powerful figure.
The Original Leader – When the Portuguese left East Timor in 1975, the Timorese actually declared independence and elected a president.  A few months later the Indonesians invaded (with a nod from Australia and America) under the guise of a pre-emptive strike against a possible communist uprising – tut, tut.  Anyway, an old leader from this era is running again – that is, until he died a few days ago.
The Minister of Justice – now this ones a lady.  She is a trained lawyer and apparently she was Alfredo Reinaldo’s mistress and the lady who was facing some sort of court action in Australia in connection with the afforementioned shooting.  (Could this really be true?)  The Ministry of Justice remains my most least liked place to visit amongst all the ministries when I have to deal with bureaucracy.
There are, I believe, another 9 candidates but I dont know about them.  I think this will be between Horta and Lu-olo.  But, being not so into politics, its a stab in the dark.  All the Timorese must go to there registered homeland.  There is no long distance voting.  So Friday is set aside to travel back home to get ready to vote.  You just put a “1” beside your choice.  A candidate must get more than 50% of votes to win.  Needless to say, this is highly unlikely for any candidate so the top two will be chosen for a rematch in a few weeks time.  Tedious business but I’m sure dragging out the event will help to simmer down emotions.
at 10:38 PM

Email ThisBlogThis!Share to TwitterShare to FacebookShare to Pinterest
Labels: politics