Tetun Bibles on a round-the-world tour

We had an opportunity to bless some Timorese in Europe in 2011.  Many Timorese would like to head to countries in Europe and Australia to find work.  Some Timorese are there because they fled the trouble during the Indonesian occupation.  Some are able to raise the necessary funds for the flight and go overseas in the hope of being able to make some decent money.   They sometimes find themselves in difficult situations and get caught up in drinking and trouble.  Earlier in 2011 we were contacted by a Man in the Netherlands who had connections with a group that works with these Timorese immigrants/refugees in Ireland. They requested some Tetun (Tetum) Bibles so we arranged for 2 boxes of books to be sent over – 120 New Testaments and we threw in a number of the Wycliffe publications (Mark, Acts, Paul’s Letters, Genesis).   It will be very encouraging for these people to get a book written in their own language on the other side of the world.  We just received some pictures showing the distribution of some of these books.  Very exciting.  It was actually a bit logistically difficult to make this happen in terms of costing and sending.  We thank God for the privilege and opportunity to be involved in this sort of thing. 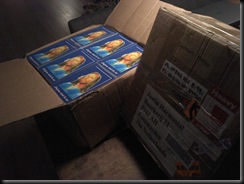 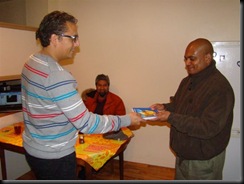 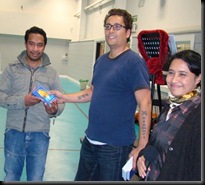 May God bless these people and be close to them in the land of potatoes.
Over the last 6 weeks we have been working hard to make some big transitional changes in the housing project in Lismore.  The Lismore Salvation Army Corps has showed great interest in establishing one house as a share house for men aged 30+.  We hope to also be involved with Ballina District Community Services Assoc. in partnership with North Coast Community Housing.  Some excellent work is being done to meet the needs of people in Australia who find themselves in a position where it is difficult to find a place to stay.  We hope in some way that our work will assist in this area.
We will return to Timor on 26th of January and hope to get into the swing of things as soon as we can.  This year we look forward to a presidential and parliamentary election – the first since the crisis in 2006.
at 4:16 PM