The Passion for Los Palos 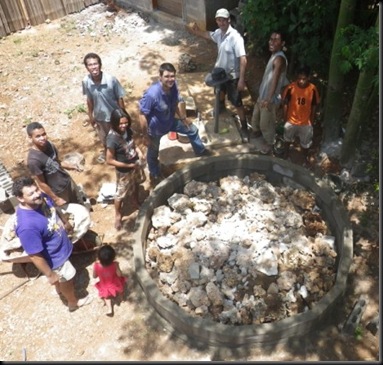 This week we have had the privilege of Geoff, Graham and Nick visiting us from Darwin. They had two main aims for this 10 day trip: to improve the water supply for Pastor Samuel in Los Palos and show the “Passion” movie to some of his house church groups. After much discussion on how to go about making the water more reliable for the church we settled on buying two more 1100L tanks. Transport is now a serious difficulty since our truck is no longer able to make the trip to Los Palos. We travelled around the streets of Dili to find that the main shops had sold out of all tanks. By mid morning we figured we’d missed our slim opportunity to buy tanks and put them on top of a bus to Los Palos so we abandoned the idea and decided to go for buying a corrugated zincalum tank in Baucau, a major town half way to Los Palos. The other preparation was to purchase a data projector, DVD player, speakers and other electrical equipment as well as the DVD for showing the Passion movie. With all this equipment loaded into a borrowed vehicle we set off for Los Palos. Its about a 6 hour journey to cover the 220km with some spectacular views along the way. We follow the northern coast of the country and turn up into the mountains toward the end of the road. Los Palos is situated in a large catchment that drains to a mountain lake at the eastern end of the country. 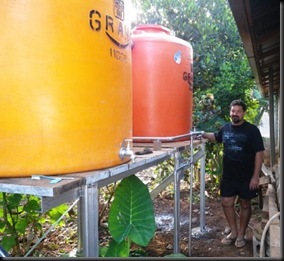 We found all the gear we needed for the tank stands in Los Palos and began work on these. One was an extension of a stand I had made last year which they thought was a little on the wobbly side. Picky, picky! A few diagonal bracings sorted that out. The other stand was to be a concrete base for the metal tank. In my mind this, of course, was going to be a circular base. The boys were more than a little surprised at considering anything other than a square. Coming from the hills of Lismore, I think straight lines are over-rated, curves are beautiful. It took a fair amount of coaxing and cracking of jokes to bring them around, but finally they let me make a circle.  I am almost positive that somewhere through the process they began standing back and admiring the beauty of a curve. 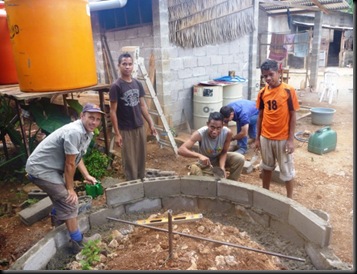 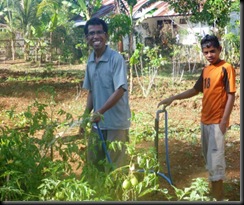 Pastor Samuel happily waters their community garden with the new tap installed by Graham.  The young people have a few beds to grow vegetables for the group as well as some to sell to gain a small income.


Showing the Passion movie proved a little more tricky. The first night was fraught with electrical problems. The electrical wiring in the house where we were screening the movie was all but completely fried. Rusty connections and melted fittings meant his fuse switch regularly tripped and proved unusable in its current condition. A crowd had already gathered and I had my tools so frantically set to work trying to make the wires somewhat usable and not get myself fried in the process. Meanwhile the boys set up the little generator from the church. This actually worked for the first 3rd of the movie although we could smell something melting. Eventually the voltage regulator sent up a plume of smoke. I removed it from the equation and then the DVD player got immediately fried. By then we worked out the generator had serious carburettor issues and wouldn’t start. 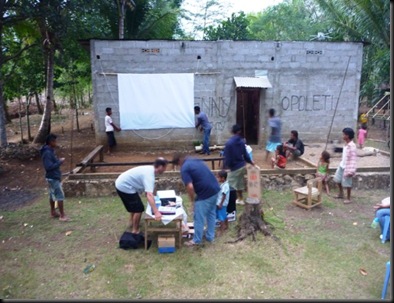 We then wired the system straight into the house fuse switch bypassing the house wiring altogether and used a borrowed DVD player that turned out not working. In a last effort we shorted the blown fuse in the other DVD player but when it started sparking we figured it was the end of the night. The locals really wanted to see the film so we decided to come back the following night better armed. The next morning I rewired their house while Nick did an overhaul on the carby. We decided in the end to take a bigger generator owned by the church. The boys bought another DVD player and voltage regulator and we showed the movie with no problems. A number of people came up to receive Bibles at the end of the night and then wandered off into the darkness including one child who happened to carry off the key to our car. After an extensive search we left the car and walked the 5km back home (very embarrassing for yours truly who was the last one with the key). By the following morning church folk had scoured the village knocking on doors and miraculously the key materialised to my great relief. During this time I got to talk to a couple of families about purchasing a 2000L air-tight silo to save their harvest of corn. We figure that with the s 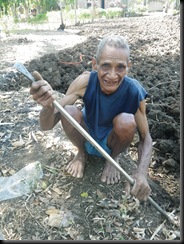 ales from the first harvest they can repay the cost of the silo. They are a hardworking community. One 70+ year old  gentleman had turned over about 2 acres of field by hand with a metal rod from an axle shaft. I have never seen a piece of steel so shiny just from continual daily use. Much of their corn will be eaten by weevils within the first 2 months of harvest. A silo like this will increase their effective storage by 10 times.
The last night of viewing was at a house church run at the town markets. People at the markets run small stalls selling clothes, vegetables and other items. Many families sleep in their small shops as it is their only home. The movie was screened outside on a wall of one of the market buildings. The night was going well until 5 young men took it upon themselves to try to stop the movie. They started throwing rocks onto the nearby roof and into the crowd. The crowd quickly dispersed in fear and several of us took off into the darkness in the direction from where the rocks were coming. We met with boisterous, partly drank and angry young men who demanded we stop the film. Fortunately some young men in our church who had been saved from a life of violence boldly stood their ground against these men and sent them off. They returned soon after walking angrily around the place where we were showing the movie. Our Darwin boys made a formidable guard around the the gear being almost 50% bigger than the Timor guys. While we tried to negotiate some sort of agreement, the crowd got in on the act and started demanding that they let the movie continue. Eventually the young men settled down or walked away and gave us no more trouble that night. The Timorese here really identified with the suffering they saw as Jesus was being tortured. They have experienced a lot of torture and bloodshed in their life. At the end of the movie Pastor Samuel gave a short message and the remaining Bibles we had were quickly snatched up. The families in the market and also across Los Palos live in a volatile environment like this continually. We hope that the message of Jesus will help to bring them hope and peace. 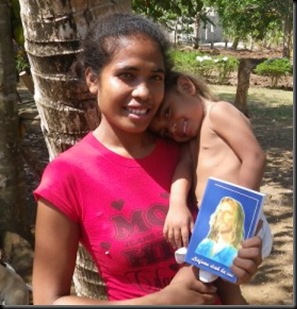 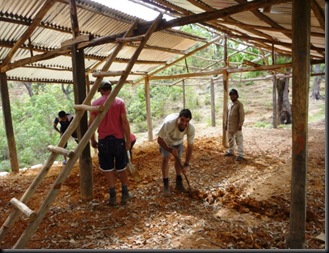 On Saturday the Darwin boys hired a ca r and drove up the mountain to help Mateus level the building site for his school in Liquidoe. 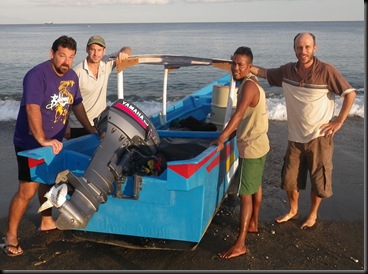 On Monday, we went out fishing to test some gear they brought over for the boat. We hope we can snag a big fish on it.  I am working with a new Timorese man to get the fishing business going.  He is making a trade run to Atauro which I’ll tell you about sometime.  Here he is taking rice, kero, and plastic sheet to trade for bamboo and fish.  The drum is from “Drums on Farms” donated by MAF and is being taken to the island to assist in corn storage.
We really appreciated guys like Graham, Nick and Geoff who give of their time, their money and their heart to encourage us and support us in our work. Thanks guys.