To Teach a Man to Fish 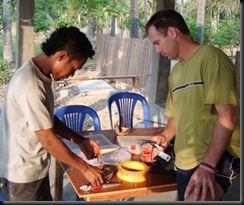 The title to this blog seems a little sexist in this post, post modern world but that’s the way the saying goes. You only ever see men here in East Timor fishing. Have you heard the saying before? “Give a man a fish and you feed him for a day, teach a man to fish and you feed him for a life time.” Generally we nod and say true, true – I never thought I would become embroiled in the literal application of the meaning. Its a lot more involved than a one liner. First we got a boat which just happened to come our way on a very good deal. Then it turned out the Timorese guy didn’t really catch a lot of fish with it. Then I worked with him to put a roof on the boat, print business cards (diversifying) and appoint a marketing manager. Still no luck. Now we have Geoff to save the day! He has come from Darwin with his wife and two kids. Geoff is a keen fishermen and is eager to go fishing with our Timorese fisherman, Gomez. More than that, he has brought a sounder and a GPS! This means we can identify good fishing locations by looking at underwater formations and mark the position with a GPS. It might sound like cheating to some people and perhaps a bit of a leap from dugout canoes to the 21st century. We’re not saying we’re doing the right thing but we’re just having a go at helping a guy put food on his table. So the boat is rigged up with the sounder, GPS, lifejackets, old fridge for icing the catch, a 12V light and some pretty good tackle. Geoff has switched his thinking from fishing for sport to fishing for survival and they are off on a three day journey to the island to catch as much fish as possible. They’ve been out of phone range for 2 days now so I hope it is all ok. Thanks heaps to those people who have put in to support this venture. Lets see how many fish they catch and then ultimately whether Geoff can “teach a man to fish.” (Even if they don’t speak a common language – minor detail). 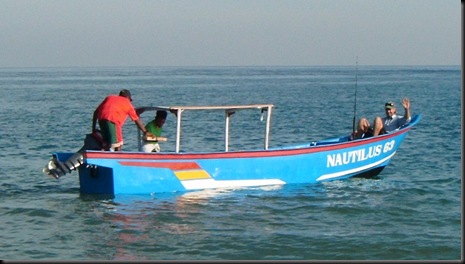