Lino and the Ambassador

My good friend Lino, the humble corn farmer, has been on a long journey. He lives in a small village in Lautem, the eastern most  district of Timor-Leste. He’s what we call “salt of the earth” with “a heart of gold.” He’s ready to have a go at most things I throw at him even though he is really not sure how its going to turn out. But it seems that God continues to bless him. Recently, the Australian Embassy contacted Seeds of Life (SoL) and said the Australian Ambassador is going out to Los Palos and wants to see a farmers group. Lino’s group, Buras Hamutuk (Grow Well Together), have now become the third largest corn seed producers in the country and so SoL suggested he goes and visits Lino! So they borrowed the neighbour’s biggest tarp, and a few special tables and table cloths and plates. They went and dug up extra sweet potato, cassava and peanuts to make a special morning tea. The one hour visit from the Ambassador was going to be a big do. 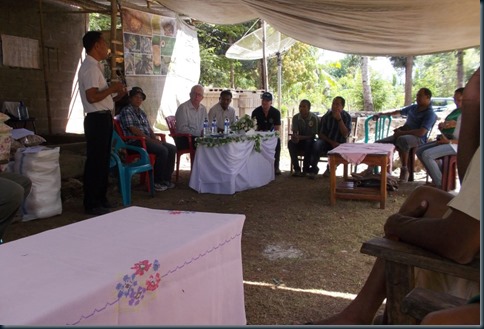 The Ambassador and other important people meet with Lino’s group under the tarp. 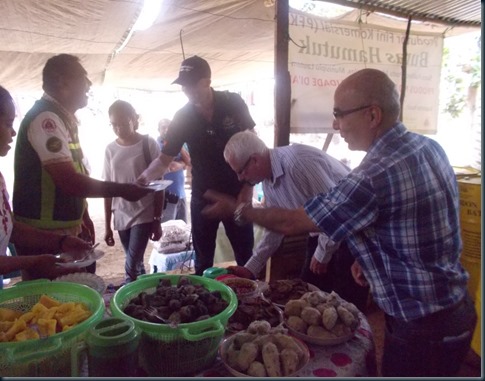 Sharing morning tea with the Ambassador.

Lino now has some cool tech to show off: 2000L silos, seed packing equipment, drums for seed storage, shelling machines, planting tools, grinder, seed screen, flour sifter, rust proof fencing and a husking tool. Some of these were new to SoL as we generally experiment ourselves before taking to the big organisation. 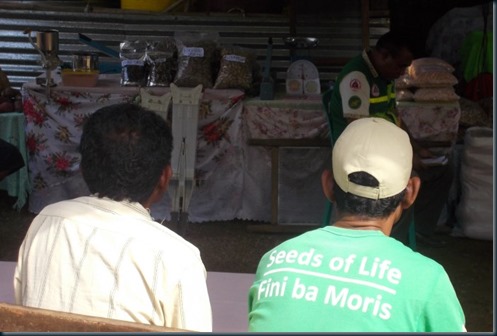 A couple of Timorese checkout the table (behind) displaying tecnhology and produce from Buras Hamutuk.

It was a very successful visit and I think the Ambassador was very impressed with the work that they were doing. 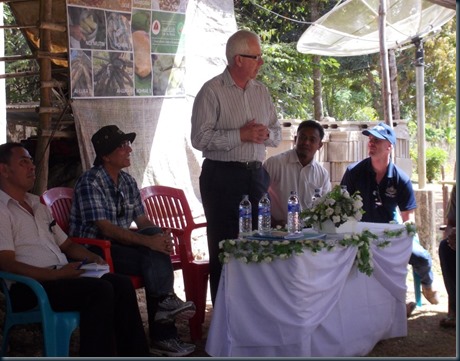 The Ambassador has worked hard to learn how to speak Tetun reasonably well.

But there is also another side to Lino and his wife Atina that perhaps none of the fancy folks there found out about. If you take the time to listen to their hearts without any fanfare or expectations you find a couple that long to serve God.

In fact Atina would like to become a pastor but Lino worries about how to handle the work load of the farm and making sure there’s enough food on the table. They end up trying to balance both – the farmer’s group and the ministry. 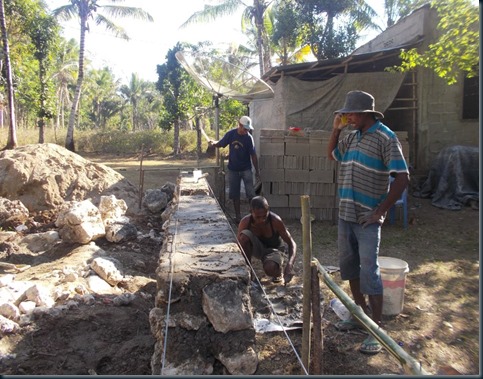 Lino in the morning, managing construction of the group’s seed warehouse. 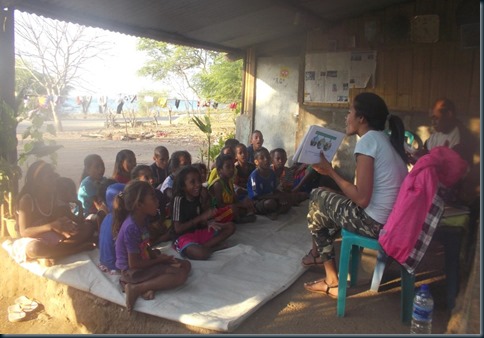 In the afternoon they are off to the villages to teach children Bible stories.

Its a tough load and they have their hard times and are currently worried about a second miscarriage this year. Atina has just come to Dili to do some more training. But things have taken a toll and she found herself last night in the National Hospital. We went and picked her up today and brought her to our home here to try to feed her up, and most importantly, get her to drink enough clean water. We pray for Lino and Atina, that God would give them good health and show them what He would have them do.

May God bless Lino and Atina abundantly with health, wisdom and favour.