Took the plunge and removed the roof to our bedroom this week.  The thatch can be used to shade the chicken pen.  I splashed out and bought 4 sheets of quality zincalume roof sheeting. 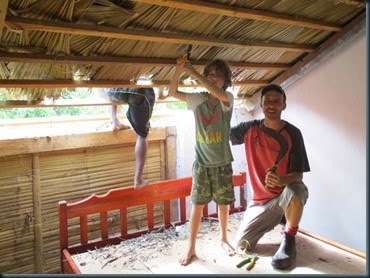 Taking out the thatch roof.

We’ll also re-line the walls, changing the split bamboo for plaster board.  The bamboo was severely infested with grubs that leave behind a very fine dust.  It seems some of my efforts to be more natural have failed.  These natural building products tend to attract lots of critters and impact on Cynthia’s breathing.

Emmy made the comment that the money we spent on this one room could build a whole (small) house for Timorese.  It wasn’t meant to be a nasty comment.  Its all part of that conundrum, it costs a lot for us to be here but if I didn’t do it then we simply couldn’t be here to do the other things we do. 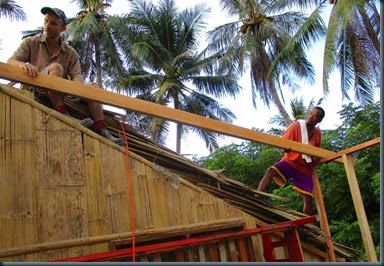 For three nights, I’ve enjoyed sleeping with the stars.

I’m also reading through the book of Joshua in the Bible which basically describes what we would call today “genocide” in the name of God.  I also wanted to understand more about the Armenian genocide in 1915 that is being talked about.  Interesting that the ANZACs attacked Turkey the day after the arrest of the Armenian intellectuals.  Makes me wonder had the allied forces been successful in capturing Turkey if they could have prevented the mass killings of innocent Armenians that followed this event during 1915.  Perhaps this genocide was the precursor that informed Hitler’s approach to the Jews.  Puts another spin on the justification of Australians and New Zealanders attacking Turkey.  There is so much about this world that is complicated.  I wish I was less judgemental.

Cynthia is feeling better.  We still go in and out of fevers which just seems part of being here in the wet.  Things like hand grinders, barbed wire and chicken wire are starting to be sold out into the districts through the small business, CPB.  And the training centre is getting a rock foundation.