Getting it out to the people 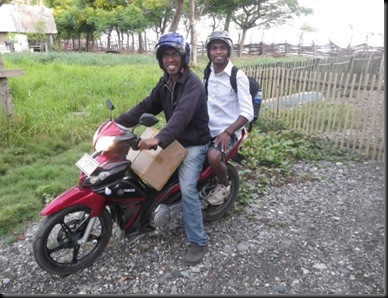 As I now have a full time job I need to think up a different approach to keeping our other various activities going.  So I book up a few meetings here and there.  Pastor Samuel on the motorbike has come to visit me with Lino from Los Palos.  We met for 2 nights going quite late to discuss churchy things and corny things.  There’s the progress (or lack thereof) on the Nazarene Conference Centre in Dili, Bibles, and future plans for the Church in Los Palos.  We hope to start a youth accommodation centre out there soon – we’ll probably just wait on a go ahead from the Nazarene director in Indonesia. We sketched up a rough plan for a 7.2m x 6m building to house 12 youth and a study corner.  I also discussed with him one of the latest fad words in aid work which is “sustainability”.  That is, if we build this thing and the youth come, who’s going to pay to feed them?  We discussed the possibility of work in gardens and corn fields.  It was great having Lino there.  He said he’d be happy to set up a corn field and have them work in it to earn the funds for their accommodation.  For the youth, they’d have a safe place to live while attending secondary highschool and can be a part of Pastor Samuel’s youth training program.  We also talked about the Leader’s Bible Course getting written up and I showed him a first draft of a character study session.
Lino was there to talk corn.  I want to ramp this up and explore ways we can build up to 20 tonne storage in villages that grow lots of corn.  We kept throwing around ideas and budgeting and I’m still not sure which way we should be going.  He asked for a corn mill which costs around $700 and will allow him to mill corn for the community.  People pay $1 to get 10kg of corn milled. Apparently its a thriving business opportunity.  Heck, I haven’t tried anything new for a while so we might as well get into the corn milling business.  I also hope to send another silo out there for him and later in the year some barbed wire to fence off another hectare.  I offered a silo to another farmer but he feels he can not pay it off in two years with his family of 10 children.  It might sound mean but from experience, I think I should stick to my guns on this one.  I’d rather go in on a two year repayment plan and show grace later if he cant pay rather than go on a very loose plan of “pay it off when you can”.  What I really want to know is if the farmer believes in the idea of a silo so much that he’s will to enter in on a contract to repay it.  Any farmer out their will take  a silo for free and you cant be sure they’re going to use it for what its made for – to give them greater food security.
Pastor Samuel will go back to Los Palos with his box of 60 Bibles.  Other churches out there are asking for them.  We’ve also supplied 6 guitars to go as part of their home church network.
at 7:30 PM