The Truth About Rango

We saw the movie Rango the other day.  It was pirated, but that’s all they sell in the shops in this country.  I hope that this blog may entice a couple of people to pay to see the movie and hence I will justify my pirated copy through free advertisement.  Anyway, although the thing is a little quirky, I found myself associating with the character – Rango.  I mean, I am just a little odd, I have walked into a world in which the “source of societal discontentment” is often water and then I pretend that I am the man who can save the day even though I have little idea of how to do it.  There is a sinister side to the water and ultimately there is evil lurking around the corner, controlling the water, oppressing the people and strangling their crops.  To save the day you have  to eyeball the evil and make your stand even though you know you are dealing with a very powerful figure.  I’m sure I will die one day, probably from infection.  Funny movie but very real.  Of course this all only makes sense with God in the background, weaving his magic, revealing his power. 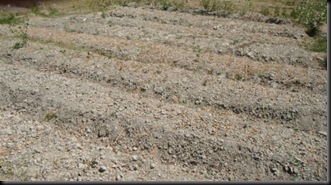 These are garden beds put in by the Nazarene church youth in an attempt to get some income.  These are full of dead vegies – hope that dried up when their bore failed.  Its now late into the dry season and their bore was not bashed down far enough.  I am trying to help them get the bore down further.  Just on the quiet, I’ve never done boring work before.  The farm I grew up on relied on a spring further up the hill and the water came down by gravity.  But now, in true naive style I have been dubbed the expert.  We employed a guy to do the work but the chain on the pulley he uses to pull up the bore pipe snapped and he has given up.  I bought a three tonne pulley (block and endless chain type) and with a bit of grunting in the bottom of the dry well with a Timorese and 200 mozzies we somehow managed to pull out the pipe.
The simple way to make a bore in this country is to bash a 40mm diameter steel pipe into the ground as far as you can.  Then pull out the pipe however you can and clean out the dirt stuck inside.  Repeat this process until you hit water – preferably in a sandy layer.  Then pull out the pipe,  clean it one last time and bash the bottom end flat into a “spear” shape.  You cut some grooves just above the spear end to let water seep in and then bash the pipe into the ground to stay.  Because this bore pipe did not go far enough down we had to cut off the spear and bash it down and add another length to the pipe with a joiner.  This is where I made my fatal flaw.  I didn’t tighten the join up properly.  We bashed the join about 2.4m down into the ground and the join came apart.  Now our options are to bash a whole new pipe or, if brave and dumb enough, climb down the bottom of the well and try to dig down to the join put a chain on it and pull it out.  It is possible, so long as the whole thing doesn’t collapse.  Save on burial costs I suppose.  Perhaps some heroes are just idiots who happened to survive. 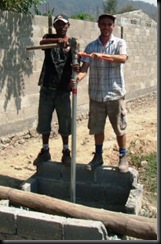 Email ThisBlogThis!Share to TwitterShare to FacebookShare to Pinterest
Labels: how to, projects, water

lol Sam. I bet you'll never go back to doing boring work either! It's always interesting! Hope you are all well. Missy