We have finally moved into our new place! Its like a dream and we have to keep checking to see if its really true. We have a place to wash our hands, water that flows even in blackouts, a place to set up an office and heaps more. Cynthia is over the moon!
We moved in on the Thursday and went to pick up a group on the Friday morning so there was no time for sitting back and enjoying the view. Israel was happy to find an unexpected 5 year old boy as a member of the group!  They have come over to see a child that one of them sponsor. They are a laugh-a-minute which I think makes up for their lack of good planning. But in a place like this, good planning often leads to disappointment … no, I’ll rephrase that – either good planning or no planning and you’ll probably end up with some frustrations and disappointments but you’re sure to have an, err, unexpected time here.

After two nights with us, we saw the group off to travel to some far flung mountains to find the orphanage.  Upon arrival they found that the girl ‘being sponsored’ had long gone and the orphanage didn’t really know where she was. After some anxious phone calls and waiting they finally were able to find and meet the young girl in Dili. She was living with her brother who was renting two rooms in a run down part of town. Eight people were living in these two rooms. Her lovely brother had tried to place her in a boarding school in Dili but did not have enough money. The sponsor money had never really seemed to reach the girl and she knew nothing about this Australian lady who had been caring for her for the last 18 months. This was a very emotional time for all of us.  I am very glad that this group of people had the heart and the courage to come all the way over and look for their sponsor child and find out what was really happening.
While this team was here, Sylvia, from Tweed Heads Salvation Army, and her two children (Keith and Lynise) have come to East Timor. She came with a team last year and has come back for two weeks. So for a couple of nights we’ve had 14 people (including us) stay in this house. Serenity is loving have an Australian friend her age!
As the team arrived back earlier than planned, we decided to take the opportunity to deliver 44 gallon drums into the mountains. This is in conjunction with Drums on Farms East Timor. MAF avgas drums are donated to this organisation. Farmers in the mountains are able to use these drums to store their grain such as corn maize or rice. Its especially good for storing corn as the drums are airtight and the weevils in the corn will suffocate before damaging the corn. 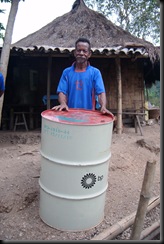 It must be good to have visitors. Wonderful that they were able to find their "sponsor child" and hopefully set things right somehow.