It has been a difficult time for us over the last two weeks. There has been a rather bewildering event put on by the Catholic Church. I like to believe the best about the Church but sometimes my faith gets a little stretched in that area.
Without warning the road to our house was blocked for two weeks for the Youth Cross. This is a special timber cross about 1.8m high that started its journey soon after the infamous 1991 Santa Cruz massacre. Briefly, a young man was shot in a main Church ground in Dili by some pro-Indonesian forces in 1991. The burial was massive and many pro-independence Timorese used the event to make a protest against Indonesia. The riot squad was brought in and they opened fire on many innocent people. Within the crowd were a few brave reporters who braved the blood, shot footage of the whole thing and buried their rolls of film in the cemetery. They returned later, dug up the rolls and sent the awful images around the world. This created widespread publicity for the plight of East Timor and could be seen as the beginning of the end of Indonesian rule in the country. Fast forward 20 years and we have this memorial cross that has taken on a life of its own. All the major martial arts groups are given the role of protecting this thing taking turns around the clock. They took it upon themselves to close the road and threaten any vehicle trying to enter. Beside the cross a round stone altar was built. In this was erected a sacred pole. In the lead up to the cross arriving the elders performed various rituals including sacrificing a goat, a cow and a pig. I didn’t see all of these sacrifices but I presumed they took place because the fresh bones of these animals decorate the pole. All this is set up on the grounds of the sweet little Catholic Chapel next to our house. A pretty good program has been running each night to encourage the young people to seek peace, consider how they fit within the mission of the Church and how they might improve their lives and their community. Then the priests, nuns and youth workers leave and let the young people have a dance party all night with the large amplifiers and sound gear set up for the Church. This has been going on every night for two weeks.
I have a major issue with mixing sacrifices, altars and ancestor worship with Church functions but I thought that this was not the time or place to say something. I am not sure if this is right. I also have serious concerns about the Church asking martial arts gangs to guard a Church function but I chose to be quiet on that as well. But when they decide to block the road and blast the night away for two weeks I think that perhaps they are going a little too far even in the lower realms of human sanity. So Supersam, bald and short as I am, decided to take a stand. I started with the boys themselves, went on to the community, then the leaders, the village chief, the secretary of the martial arts alliance (if you’re thinking some timid pen pusher you’ve got another thing coming, this guy is a night owl and the meeting took place at dawn, he is the second in command) and then on to the UN police. All we wanted was freedom during the day to enter our home with our vehicle without fear of intimidation and the freedom at night to sleep. Seems as though it was a little too much to ask. But at least we got access a few times to run our various projects and we got through it all without physical injury.  Just this morning Cynthia got so angry about the noise she started climbing ladders at 7.30am pulling down their tarps and shifting their amps while they all slept.  They all seemed to accept that after over two weeks it was time the party stopped - she's my hero.

The kids have been suffering from some tropical diseases such as fever and boils. We put our Community Development worker back to 1 day a week. The people from Maquili have put in a proposal for a small business making coconut oil but its ringing with warning bells so I probably won’t go ahead with it at this stage.
Cynthia: “Sewing project, busy, only Sinta and me. Starting a second experienced sewer this week, arranging everything so Sinta can manage it while we are in Australia. Had many problems with treadles, Got to a point where both were unusable, and it was a black out so we couldn’t use the electric machines. Samuel spared some of his time to do a big overhaul on them and tightened up a number of loose bolts, and re-aligned some pins, so at the moment they run lovely! Praise God!
Delivered our first bulk order to an NGO. (Unfortunately, they were not yet able to pay us which puts a rather large dampener on the excitement of the delivery.) Sinta was very amazed to see the invoice come to $215! (Mind you Samuel took me to buy more fabric supplies and he insisted I spend up) So $240 of fabric is sitting under our table and getting sewn into bags etc.


The mending jobs keep coming in with up to 6 jobs a day. With each of those bringing in $1-2 plus with sales of bags we are easily covering expenses and Sintas wages with a small profit.

Who would of thought we could start an enterprise that runs at a profit within 2 months?

Not me! I give thanks to God for all the gifts that enabled it to start, and for finding such a suitable employee.”

I have had to put most of our work on hold to complete the beach front units. I have been working very hard on this in the midst of all the aforementioned dramas. The evil spirits really know how to put up a fight. But I know a good bloke who once made a stand and died in the effort. When all seemed lost he came back to life. I’m holding out for a miracle from him.


We have drawn up a chart of our structure which I will endeavour to get on this blog.  It shows the different things we are involved in, hope you can read it and if you cant I am sure it looks impressive: 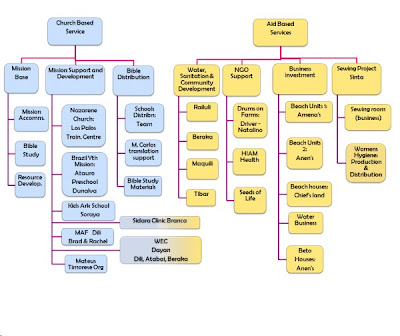 We are returning back to Oz on October 30.  Thats just over a week away.  Those who are familiar with my stupidity will know that I will be working myself to the bone.  Predestination - gotta love it.
at 9:04 PM

you guys are so funny! Don't mess with Cynthia's head too long hey? Sam, your diagram is surely impressive, even when you can read it. Thanks for keeping us in the loop. Hope your next week is great, productive and not too stressful. Will pray for the kids and their strange sicknesses. :-) Missy.

Hi Sam and Cynthia,
Whoa!! sounds like very trying times over there! It reminds me of an experience (though not as intense as yours!)when I was living in Israel in Tel Aviv, there was an alarm that went on for days somewhere in our neighbourhood. It didn't stop day or night and nothing was being done about it. Eventually on the weekend I got fed up and tracked down the noise to a security alarm on the side of a building a few blocks away. I managed to scramble up the downpipe and rip it out! It felt so empowering! Peace at last! Right on Cynithia!!
Take it easy in the last week sam- we want you back alive!
See you all back in oz soon for a well earned break hopefully!
rohan