Launch of the Sewing Group

The highlight of this week would have to be the launch of Cynthia’s sewing project. Cynthia spent some time getting to know the style of her archaic sewing machines while waiting for Samuel to prepare the workshop in which to put the machines. We arranged with our Timorese neighbours to use one of their front rooms. It is a great room about 4.5m x 5.5m that seems just right for the project. We arranged some Timorese boys to block up an open wall, put in a couple of doors and paint it white. While this was happening, we built a large central cutting table. Then Anen, the owner, put in some power points and lighting and we were ready to go. I bought some cans of sprite and biscuits to have a little launching party. We shifted in the 3 machines and a small stud press and laid out different materials for the women to look at. We had a little ‘house warming’ party and about 10-12 women (young and old) came in. Cynthia was a bit shy and not keen on doing a speech so Samuel made a little speech and Cynthia “opened the can of sprite” which is a little ritual in this country for kicking something off. The women were very interested in looking at the different materials and seeing how the press worked but mostly they wanted to sit at the machines and have a go. I will insert Cynthia’s comment here: “Oh the frustration! It was like letting 8 year old boys into the wood working room at high school, and letting them try out all the machinery!” I would rather liken it to a bunch of 8 year old girls – suffice it to say there was a little bit of hogging going on. At this point Cynthia realises that teaching is not really her thing so now she’s freaking out a little about how she’s going to bring them to a level where they can produce a reliable product. We have hooked up an electric motor onto the treadle machines but I am convinced they still think they need to press their foot up and down in a rhythmic motion to get the thing to work. Time will tell how the whole thing will go but Cynthia is just an awesome person and I am really excited about the whole endeavour.
In other developments this week – the World Vision contract is definitely off (they left me high and dry, sniff). I think I am just a little too weird – enough navel gazing. But we have come to a spot where we realise that financially we cannot maintain our ‘living on thin air’ existence for much longer so unfortunately I am going to head out and look for paid work. This is a bit of a struggle because we really came here to serve God helping the poor. Anyway, because God is good I never seem to need to look far.
Security has been a bit of a theme this week. A mission house connected with WEC was broken into in Dili. The lady woke up in the night to see the thief half way out the window with her laptop – needless to say her vocal chords got a good work out. I went around the following afternoon with Brad from Mission Aviation Fellowship and we nailed up some boards to improve her security. I’m also mid way through putting security doors on our friends’ house – the lady there is the linguist working with the Bible translation.
<><>
<> 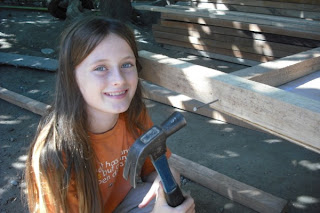 <><>
The beachside investment project is moving ahead, foundations are in for the next two villas and the roof beams are going up on the 1st one.
I have agreed to take on oversight of the building of a preschool for a Brazilian missionary lady working on the island of Atauro. Most missionaries here are ladies so I ask the question, “Where are the men?!” I could do with some help. Anyway, $10,000 has been donated on condition that the project is managed by an aussie. The upshot is that if I turned it down the money would be sent back to oz and the poor kids would miss out. So tomorrow I cross the ocean again – the beginning of many sea voyages in less than satisfactory vessels. Perhaps I should put in some flippers…

God bless and have a great week,

Hi Samuel Too bad about the World Vision gig They don't know you . Weird is why you actually make it happen & not just talk about it like the rest of us normal do nothingers. (it is a word I just made it up)Steve Muir

Cynthia, I am so proud of you. You're gonna do a great job teaching the ladies to sew, you wont be able to help it. Remember, slow and steady and God is your helper, or should I say you are God's helper. Either way it's gonna be great.
Love to you all, Missy.