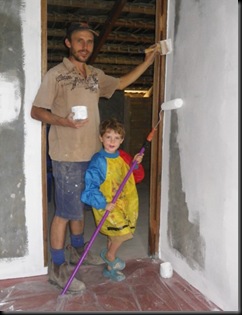 Kids and Cynth are sick again.  Today Serenity had a temperature of 39.4 deg C.  She’s seems pretty happy considering.  I have been just working on the new house – painting, tiling and installing windows.  It feels very selfish of me to work on something that my family will use.  I tried doing one wall with plasterboard for the first time ever in East Timor.  The shops are always changing and getting new supplies (things we may have had for 40 years in Australia are just arriving here in Timor).  The idea was to give the Timorese experience at a new building technique.  For them, building a wall is about using flattened bamboo if you are poor in the mountains or building in concrete blocks if you’re a little richer.  The idea of making a frame out of timber and lining it with some flat, flimsy product seems very weird.  They said the plasterboard looked great but wouldn’t last long in a Timorese house because as soon as someone got angry there’d be holes in the walls.  The wall was looking great to me until it came time to plaster the joins and I found that the quality of plaster was not quite up to speed and it seems almost impossible to get a standard smooth wall finish – basically it dries too fast, within 2-3 minutes its unworkable in the bucket and dries within 5 – 10 seconds on the wall.  Needless to say my Timorese friends had all sorts of professional opinions about how I could improve my technique.
The whole design of this house is quite strange to the Timorese, and its probably quite different from something in a developed country. 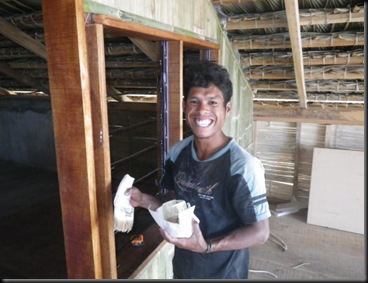 I suppose it came out of a strange head.  But its great to see them get experience at new things and improve their building techniques.  They are realising that if a wall is not built straight (plumb) then its hard to fit a door to it and the square tiles don’t quite look right.  They are learning to bring their tolerances down from a few centimetres to a few millimetres.
The picture on the right here shows Apeu varnishing some timber – it actually takes a little coaxing to get them to do their natural smile long enough to catch on camera, but its worth it!

On the left here, Apoli is using a grinder to cut security bars for the louvre windows – notice that I’ve given him Australian standard safety glasses nicely placed above the eyes.  You may laugh but I am very impressed by this guy’s safety – he has boots on, earplugs in, the guard on the grinder is roughly right and his technique is good.  In East Timor, you’ve got to look at how much they’ve progressed rather than pick on a snapshot in time.
We hope to move in to the new house next week, maybe Thursday as we have visitors arriving early Friday morning, and then another lot the following week and so on.


Preparations are also in full swing for the 1 year anniversary of the death of my good friend, Maun Je.  Cows and pigs are being brought in.  The firewood to cook the feast has been stacked and drying for the last month.  The new temporary kitchen has been built.  The grave is receiving its finishing touches.  The boys are talking about how they need to finish the house very soon to give time for the final cultural preparations for this ceremony.  Its still about 6 weeks away.  I would like to spend time with Anen to learn just what its all about in terms of how much rice, money, cows and pigs goes from which family to which family.  It took a day for them to work out themselves and involves 24 families.  This culture is so important to them that one of our workers a few weeks ago started dating someone from the wrong family and was severely beaten because of it.  If he ended up marrying her – it would send this whole transfer of goods system into unworkable chaos.  He didn’t show for work for at least a week.  I really need to work this thing out as I think its fundamental to their economic poverty.
at 5:13 PM