Well here we are, last night in Oz, bags roughly packed, last minute paperwork, and 4 tired bodies.  Cynthia has been putting together a heap of materials for her sewing project and hopes to pick up some important material from Brisbane on the way through to the airport.  A wonderful lady has donated her own almost brand new sewing machine for Cynthia's project which is very exciting.  Other ladies in the community have donated enough money for 2 treadle sewing machine and an overlocker so this project is well and truly up on its way - thanks heaps for all your support.  We hope to soon send photos of a small sewing industry in action!
Samuel has been working flat out on a building project here in Lismore as well as fielding calls from East Timor for the Los Palos Training Centre.  The American, Lon who has been working on it for 3 weeks has raised the walls ready (pretty much...hopefully) for the Salvo team from Tweed to put a roof on with Samuel.  It's been a hectic 3 weeks and we haven't had nearly enough time to gather materials and research on the net for things we want to do.
The kids have had heaps of fun hanging out with the grandparents, jumping on the trampoline and riding bikes (on a thing you call concrete) as well as watching lots of cartoons.

Pray for us as we return to East Timor with our first team.
at 10:33 PM No comments:

We are half way through our 3 week visit in Australia.  Cynthia has been enjoying being able to use the internet.  She has been researching products for her sewing project.  She also had a great talk with a group of ladies who were very supportive of what she is doing.  Samuel has been working hard on a building site in Lismore.

We have just visited Tweed Heads Salvation Army who are sending a team over with us for 2 weeks.  Its amazing to see a whole church get excited about helping people in East Timor.  On Sunday afternoon they arranged a fun run as a fundraiser for the team’s project and also to raise awareness of the work in East Timor. 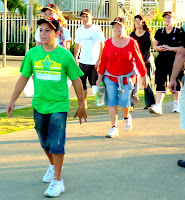 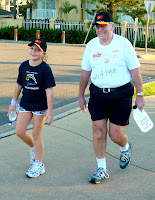 We look forward to getting back to our home church in Grafton next week before heading back to East Timor with the team.   We plan to take them to Los Palos to put a roof on the Training Centre. 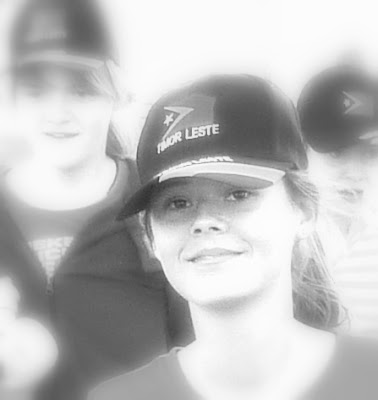 Well, while I am back in Australia, I have been spending a bit of time "researching" on the internet - ok well some playing as well.  Anyway i stumbled across a great website that makes East timor look more like it really is, as opposed to how we portray it!

It really is beautiful, and there are nice places to stay!
Check it out a bit and see how beautiful God made the place.

Maybe your next overseas holiday you could visit East timor?  You can even earn flybuys now that Quantas is selling tickets for flying on the Airnorth planes!
at 11:30 PM No comments:

In the last few days in Timor we had to finalise a number of jobs in order to keep projects running while we were away.  Cynthia has been working on a women's project which is looking great and she has begun a trial with a number of Timorese ladies.  Its a woman's thing so she doesn't want to go into detail here.  Two days before leaving we got to meet an American named Lon.  He flew in especially to take the Los Palos project from its foundations up to the walls completed.  He seems like a great guy with a calm composure.  He's had experience in Guatamala with building techniques in poor countries.  I think he's got what it takes to do the job.  We do not have time to inspect it together due to the remote location of the project.  So we sit down and I go through drawings and photos of the site.  There's one catch - he works in imperial (feet and inches) and I've done all the drawings in metric.  He assures me he'll work it out because he has a tape measure in with both measurements.  I believe him.  If he pulls it off in three weeks, I will return with a team of 8 Salvation Army soldiers an have a crack at putting on the roof.  But as the Bible says, its the Lord that builds the house - if not, we work in vain.
Ofcourse, in true Samuel style, I inspect a new project possibility - the water situation in Beraka -  on the last day in Timor.  The aim is to see if we can improve the water collection point and also the water quality possibly as a side job with the team.  There are some issues in this village with many of the people wanting to give more alliegance to the water spirit in the mountain than to God whom they also profess to believe.  This has some interesting implications for how we approach any work in water here.
So we leave these things in Gods hand and return to Oz to do what we gotta do there.
at 11:40 PM No comments:

A Death in the Family

A death in the family


Over the last 2 months, our neighbour has deteriorated from being able to walk around in his garden to lying in his bed unable to speak. He has destroyed his liver through drinking alcohol. He is only about 50 years old. Last week it looked as though he would not recover. I spent some time with him in prayer and read, as best as I could in Tetun, Psalm 23. I talked with him about how he needed to prepare himself to meet God. Early this morning he died. Cynthia heard the mourning and woke me up. It was a sad time. He leaves behind a poor wife, two sons and four daughters. The three younger daughters are 15, 9 and 6. They are very upset. People started streaming in from the villages around and before the sun really had a chance to get up men were bringing in tarps, ropes and bamboo poles – a place had to be set up for people to mourn. Next came cartloads of timber, large buckets full of pots, pans, bowls and knives – to cook and prepare meals for all the people. Tables and chairs were carried in and set level. Without asking, money was given to by sacks of rice, sugar, betel-nut and other necessities. A pig squeals – there will be meat for lunch.

Over the next two days more pigs, goats and a cow are killed. The body is buried with wailing, prayers, flowers and candles. It’s a very hands on experience. A few of the young men dig out a previous grave. Out comes the old coffin, grave clothes etc and the cement lining is repaired. As the coffin is brought to the cemetery the men begin mixing cement to make the cover slab. They place the coffin beside the grave and have a bit of a discussion as to how to lower it down. Some argue for the “just sort of lower it down with your hands” approach while others argue that it might fall and it would be a good idea to let it down with rope. The rope idea wins and rope soon materialises through the crowd. They need to spin the coffin so the feet point to the east, loop the ropes and lower the coffin. There is a crowd of about 200 people. As men mix concrete and set crude formwork for a slab to cover the grave the women begin the prayers. Soon the concreting is completed, flowers are added and candles are burned. For the next 4-5 days the vigil continues. People go about their daily business and return in the evening to sit with the family through the night – until the sunrises. Night after night. Various explanations are given for this vigil: to look after the grave, to chase away evil spirits or to help the family not to think about their loss. You may start to think what a fascinating and wonderfully supportive culture. That is true, but there is a sinister side that starts to make me angry. You see, so many people come and they all want to eat meat (its usually vegetarian around here) that they start killing the poor widows pigs and goats. Not only is she poor, with three young girls to feed, she has lost her husband, and now they eat her animals. Money is collected for the widow and then gets passed on to an older brother (possibly to pay for a cow he bought to be killed an eaten by the crowd.) The night vigil turns into more or less a gambling party with multiple groups sitting around playing cards, bingo, gambling, smoking, shouting out their wins and generally having a great time. As the nights wear on the money gets bigger. The young girls in the family seem to be forgotten in the midst of the festivities. This is happening all around our house. I walk around in dismay and disbelief knowing that these people will eat her out of house and home and then leave. I am assured that they have no big intention of helping this widow in the future. They ask me if this is different to Australian culture.

We have quietly hatched a plan that will provide for this poor widow and her family. We want to offer an investement opportunity in a beach villa that will rent out to repay the loan and provide for her. If you are inspired to help this lady and have money to invest then please contact us.
at 1:58 PM 1 comment: