The Good, the Bad and the Ugly

First, something good – we received a shipment of donations from Australia!  Woohoo!  This is mainly a bunch of 7 sewing machines but also includes around 150 school uniform shirts from South Grafton Public School.  Thanks heaps to the school and also the Grafton Community Church who made it happen.  This actually inspired the whole thing.  We’ll tell you about the shirts later.  The sewing machines are a range of second hand jobs from around the Clarence valley in northern NSW (and a special one from Tweed Heads).  We found that the old singer sewing machines in Australia are far superior to the cheap copies we buy here in Timor which need consistent maintenance.  The shipment also included lots of old patterns to follow for the Timorese (your opshop fillers are gold here).  Also some school materials, books, a length of fibreglass, circular saw, battery drill charger and batteries (electrical spikes here killed the last one) and a tap for the kitchen sink (the one off our old farmhouse kitchen).  So we are very happy to receive your old garage shelf fillers over here.  I suppose its a shame its such a drama to shift it.  A big thanks to Cynthia’s folks who organised packing and to Rotary Australia for organising the shipping. 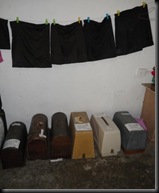 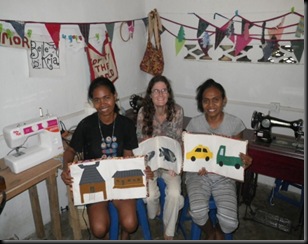 Machines and skirts; Cynth with the two sewers and cloth library books; patterns

Here’s where we got the shipment.  It came with loads of gear packed by Rotary into two 40 foot containers.  Darryl Mills in the thick of it with the blue hat has been a long time Rotary worker.  He’s head and shoulder’s above the small Timorese and sweating like a pig in the sizzling tropics.  You can either get fried in the sun or steam cooked in the metal containers.  There would be at least 20 NGO’s waiting for goods in a very haphazard arrangement.  Darryl is a very patient man.


Second, the bad – aaah thats too boring, lets skip straight to the ugly.
The ugly – its about Triloka where I was repairing the buildings for the agriculture organisation, Seeds of Life.  Lets just say that things got too ‘unstable’ and it was time I made an exit.  I was happy to keep plugging away at it but the powers to be made a decision to move me out.  I feel like a bit of a failure that I didn’t pull it off.  But I suppose I can live to fight another day which is a relief.  The good thing is, it leaves me with more time to work with the Timorese on the mission base.  This helps them to build their skills and we’re going to get our first arrivals on the 8th, July.  So it seems that God has it all under control.  It was funny how over the last couple of weeks I was taking some big tools off the building site like a shiny new wheelbarrow and my mattress.  These came home on the roof racks in two shifts mainly as cover-ups for my bamboo smuggling racket I’ve got going on (but that's  another story).

Me making a sweet get away with two body guards (awe…com’ on , I gotta make it sound a little dramatic)  On top is the wheel barrow tied on top of flattened bamboo wrapped in a tarp.  The idea is that the guys at the check point will be so interested in the wheel barrow they wont see the good stuff underneath.  It doubles as a good excuse to take the wheel barrow off the site without arousing too much suspicion.
at 1:16 PM

Yahoo for the safe arrival of the shipment. I love your sense of humour! Keep up the good work.

why do you have to hide the bamboo? like the wheelbarrow on top of the roof! good look! glad to hear the shipping container arrived and all in one piece. x