The full day journey to Los Palos passes through a wide variety of landscapes. Most of them quite stunning.  Its just as well, because the road is so bad at times that its hard to call it a road.  Especially as its “The highway” from east to west…  Imagine the backroads..:) 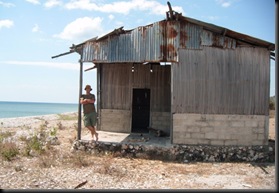 Anyway, we pass some beautiful coast lines, bare rocky mountains, scrublands, swamps, forest, and desert like moonscapes.  We have some “piku” on the roof, which we picked up on the way.  We bought it to help make some fencing at the Nazarene youth centre in Los Palos.  We also planned to finish some tiling and work on a shed roof.
(note: piku is made from the stems of palm leaves, threaded together to make a board)
I thought it may be interesting to see a few of the more “unlikely in western society” sights…. A young bullock meandering across the road, a bus, fully loaded.  The guys hanging out the doors have to hang on for at least 3 hours on this bus route, and a kid lounging on top of a truck… 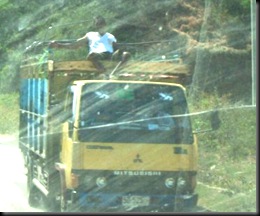 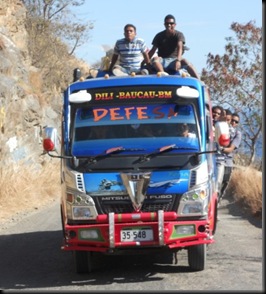 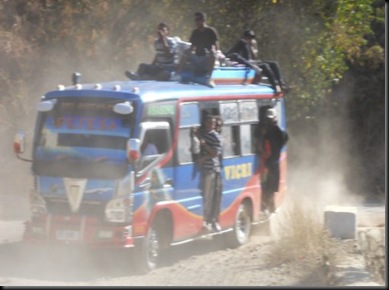 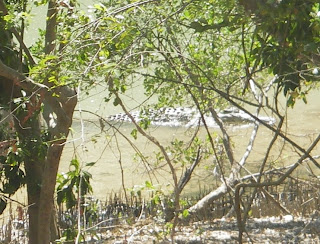 And then the picture!!!! ok, so its blurry and indistinct BUT!!!
We saw our first huge Timorese crocodile.  Our visitor Alan spotted it as we drove along, so we turned around to get a closer look.  Of course Samuel was attempting to creep up on it (all 4m of it) but thankfully it heard him coming and sank underwater and floated away.  It was a little disconcerting, but at least they aren't as abundant as NT.  And they are rare further west near Dili.
at 6:14 PM