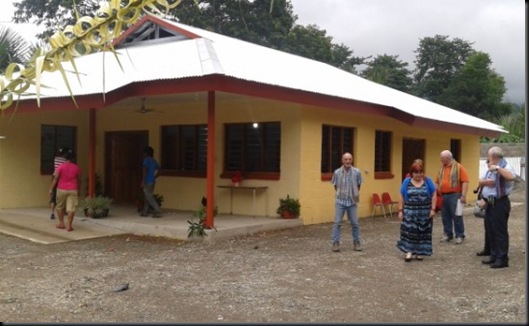 After many months of hard work, the disability centre is open – well, it had its inauguration ceremony last Friday.  It is called, “Liman Hamutuk” which is literally translated as “Hands Together”.  It has the capacity to house 6 disabled people but also has a large activity room for running activities and training sessions.  The centre will be managed by the Brazilian nurse, Branca.

Many thanks to John and Allison who worked on building the centre for over 8 months and also thanks for the strong support provided by Yooralla and others in Australia and New Zealand.  It is built very much to Australian quality standards with block outside and steel frame lined with plasterboard and ply inside. 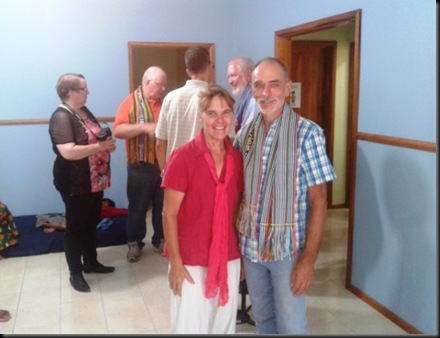 There are many traumatic cases in this country of people with a disability being left in a dark and dirty hut in the mountains with no one to regularly feed and clean them.  We hope that this centre will help to alleviate this issue and also to advocate the value of human life and that a person with a disability needs to be valued and properly cared for. 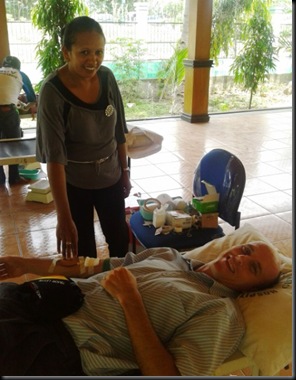 On the medical theme, I gave blood the other week.  I think I was only brave enough because my mate Rob went and did it.  I get a bit nervous in a country like this when someone shoves a needle in my arm.  I think it helped me get over a traumatic experience I had in the Dili hospital a few years back when an intravenous drip I was given went wrong (thats about all I want to say about that story).

Sometimes our family does “devotions” at night after dinner which consists of reading a part in the Bible and having some discussion.  We were reading from the Old Testament in a part that some might think is a little boring when we came across a passage about a certain tribe of Israel being appointed as priests.  This tribe, the Levites, would amount to tens of thousands of people and the Bible records that the rest of the people of Israel had to place their hands on this tribe.  We started to consider the logistics of about 500,000 men laying hands on another 50,000 men.  A simple explanation is that this must have been the first mass crowd surfing event.  Those Levites just launched themselves onto the people of Israel.  I can just imagine Aaron orchestrating a huge mexican wave  with Levites crowd surfing on top – very cool.  Of course,  this has biblical support when you go back and read the Bible as it says that the people of Israel offered the tribe of Levi as a “wave offering”.  (Numbers 8)

Xakira is going well –sleeping, sucking, burping, pooping.  Cynthia does most of the work in this departmen 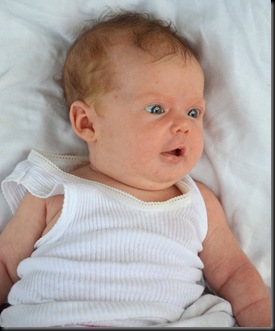 t.  Xakira is just starting to smile – if you use your imagination.  Bethany is going great helping the kids with school.  We are very thankful for Lynelle (Cynthia’s mother) coming and not only assisting with the birth but just generally helping around the house and caring for the Xakira, gardening and even helping fix machines in the sewing room.

Last week we had a few Americans stay with us as the team helped build the walls of the Nazarene church hall.  This building has been in the planning stage for around 2 years so its great to finally see some real action.  The 10m x 20m floor space is ready for a roof now and the American team is discussing going home to raise the funds to help this become a reality.  This is very encouraging for the local church folks here. 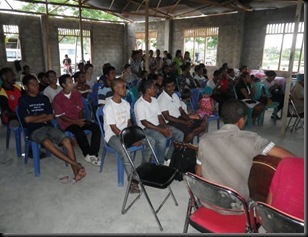 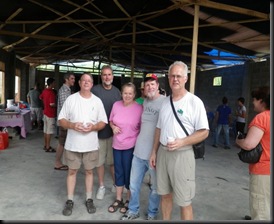 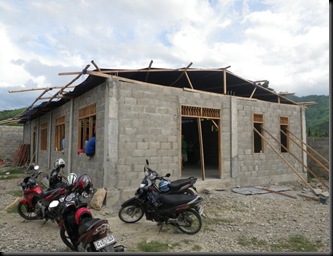 Out at Hera, John has nearly finished the construction of a disability centre for Branca.  I had the pleasant opportunity to go and do some tiling with a couple of Timorese, Anen and Apoli.  It was great to teach them more of an Aussie technique for laying tiles in a bathroom.  Pray for John that God would help him get it all finished for the grand opening next week. 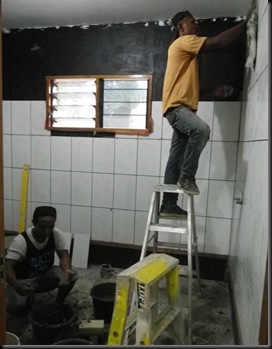 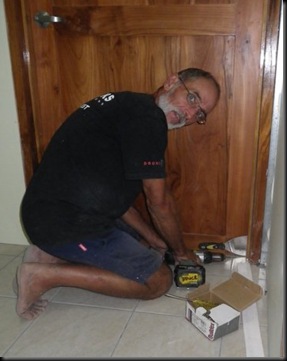 A salvo church in Australia has been inspired to raise funds for a 3 wheeled motor bike for the Nazarene church in Los Palos to use with their youth farm project and other ministries.  We hope to make the final payment on this tomorrow.  Of course, I’ll need to take this contraption for a few test runs.  More on this story later.

Jonny, the guy with the infection in his leg came back and he’s very happy with his treatment in Australia.  He was crippled during the crisis from a badly infected dog bite.  There is some discussion about him getting hip surgery to allow him to walk more easily and we are arranging x-rays to go back to oz for inspection by a specialist.

I feel like this and lots of other cool stuff we do here is only possible by the love, prayers and support we receive from folks in Australia (and other countries).  In some way its like you put your hands up to allow us to do the surfing – thanks for the wave. 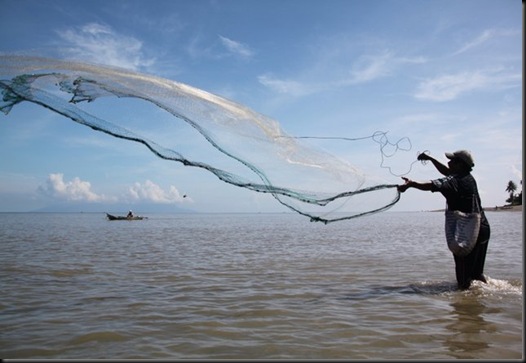 A local fisherman on our beach making the most of the muddy water.

A Load to Los Palos 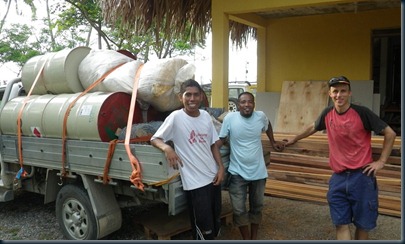 Last weekend Samuel went out to meet with Pastor Samuel at Los Palos and Lino who has the corn farm.  A few things that were done on this trip:

1. Hand out drums to pastors of various local churches for storing their corn – Pastor Samuel had no sealed drum for his corn so he lost about 150kg of corn which went mildewy and eaten by weevils.  Putting new corn into a sealed, new 44 gallon drum from MAF (aviation) will save the corn. 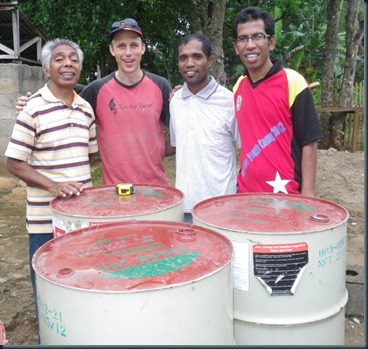 2. Deliver timber and construct the window and door frames and oversee the start of laying the block walls for the youth accommodation.  This is partly in preparation for an American team coming to assist in construction this week.  (Side note: they landed in Bali when the airline Batavia went bankrupt and ceased all flights … oops)  Tobias came with me and together we got the youth working on putting together the frames that I’d precut in Dili.  We also took flyscreen and roof insulation (the boys will sleep on a mezzanine floor and be close to the roof) 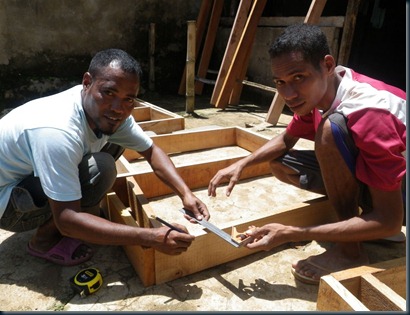 3. Deliver NPK fertiliser to Lino to try to correct some nutrient imbalance in his soil and also deliver 5 rolls of barbed wire.  This high tensile wire bought in Australia is much superior and much cheaper than the barb that we used last year which was bought from Indonesia.  Note the Indonesian barb is rusting after 3 months! 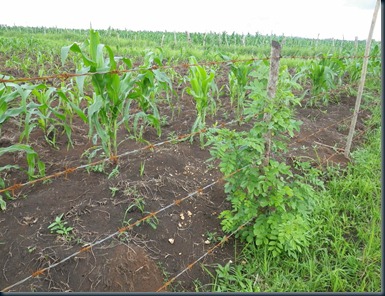 4. Inspect the corn field.  Lino is trying lots of cool new things like planting in rows which will help in the various steps of agriculture like weeding, fertilising, ensuring good crop density.  Currently he’s planting at one third of the recommended crop density rate which alone may mean his yield is greatly reduced – or in mushy terms, there’ll be less food on the table.  He’s also trying a local bean which will help to fix nitrogen in the soil and add organic matter again leading to improved yields.  Lino will then transfer this knowledge and experience to others in his group including the youth farm. 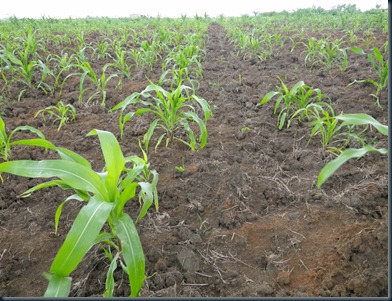 5. Collect weather data recorded electronically by a weather station at Lino’s farm.  With this data, soil test results and crop info we can do some crop modelling with computer software and explore other ways to improve yield.

6. Collect soil samples of a limestone soil to see if we can use it to correct Lino’s acidic soil.  The white soil usually has a high pH which may help make his soil more neutral.  Its a bit weird in that he has limestone rock scattered around his field but his soil is acidic.  Lino new just where to find some nice soft white limestone soil for us to test – under a tree that had fallen down. 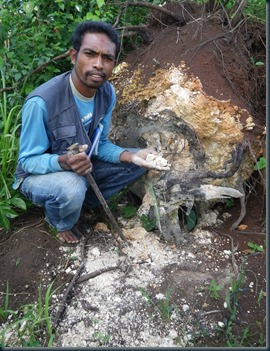 7. Finalise the accounts for the last growing season including sales of corn seed, income from the corn mill and costs associated with these.  Lino grew his first crop with me in 2011.  We then sold it as seed during 2012.  On this trip we went through all the accounts – it took ages to do this.   His loan is about $2950.  He sold about $2120 worth of seed.  Including repayments from the corn mill, altogether he repaid around $1260.

Lino is proving very faithful in his approach and the whole farm project is going well.  The big killer for him last year was just very low yields.  He’s getting about 1 tonne per hectare where as an Aussie farmer might get 5-6 tonnes per hectare.  Together we aim to get 4 tonnes off his 1.4 hectare block or essentially triple his yield. 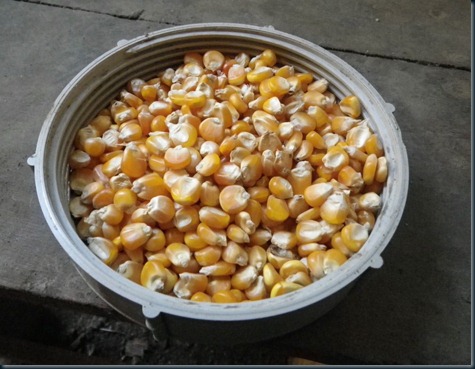 Bright yellow corn still looking great after 8 months storage in the silos that Lino has got through this project – without the silo, this corn would be destroyed.

The above tasks were squeezed into the Saturday.  By the end I was pretty tired and was glad to get back home and sort of rest.  All is well on the home front, although Cynthia is tired with interrupted sleep feeding Xakira.  Xakira is a remarkably peaceful baby.