We have arrived in East Timor! I have to say that this air trip was the least stressful of any so far… We breezed through checkins and customs etc, even with a screw in Samuel’s pocket (they saw the funny side) and Israel’s water damaged passport (not even a mention!! Praise be to God). 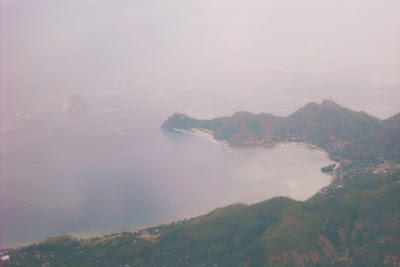 Samuel took a photo as we flyed over the island - on the point is the statue of Christ.
We had a lovely welcome at Dili airport by Brad (MAF pilot) and his two gorgeous daughters – Emily and Brianna, who were very excited to have Serenity around again. They chatted and giggled all the way to where we are living.
Samuel tried to do a map using google earth.  But it doesnt show any reference points for you.  Oh well... 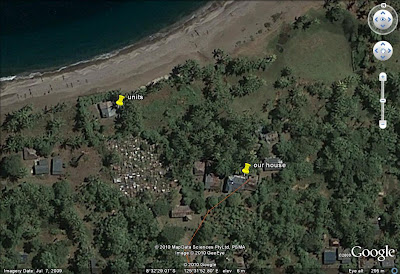 Our address goes something like this: (mind you don’t try it on a parcel;)

Maun Samuel ho Mana Cynthia,
(Big brother Samuel and big sister Cynthia)
Malai hela iha Beto Tasi,
((The) foreigners that live at Beto Tasi)
Ba Maun Je nia uma.
(At big brother je’s house.)
So we live at Beto Tasi.(pronounced bet-orr, tassy)
Oh what a feeling for me to return, it washed away all my fears and doubts. Seeing them all and greeting them, sitting around their table to eat fresh mandarins, bananas, small bread loaves and fried peanuts. Along with the standard black coffee, of which I tried to drink almost half the cup to compensate for being awake for most of the previous night.
Samuel chatted with Maun je for a few hours, and we were both surprised at how much of the language we could understand. Thank God, we have not forgotten much.

Little Israel just grabbed the first toy he saw and started playing. His little friends were at school when we arrived. Serenity soon caught up with her friends and we all had a quick dip in the ocean to refresh ourselves. 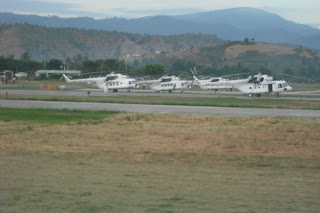 UN helicopters! Israel couldnt stop looking at all the planes and helicopters.... 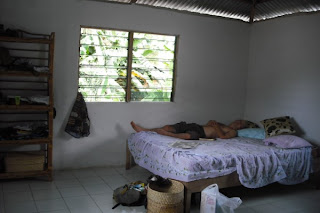