Tweak a man to Fish 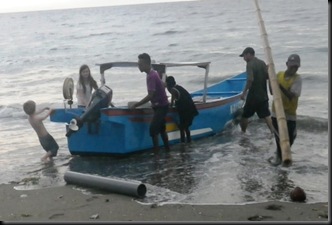 a person who doesn’t already have some skill.  When it comes to fishing, they already seem to know how to catch a fish.  I actually think this has broader implications than fishing.  Its part of this whole struggle that we have to know how to help these people (if we should help them at all) in the land some might call “poor”.  It seems to me that our greatest successes (on an economic development front) come from adding to what they already have rather than trying to teach them something totally new.  I find that improving the lives of these people is about listening to their ideas and dreams and helping them at the precise point at which they get stuck.  This might be providing a boat for a fisherman or a sewing machine for a lady or coordinating a building contract for a builder or a silo for a farmer.  Usually though, it involves more than just some simple injection of finance.  But the point is, its often not about teaching them something brand new.  For the boat and fishing saga, we have taken a slightly different tack and gone into trading.  We have found a young man, Tobias, who was labouring for us building bamboo fences.  He showed an interest in the outboard when I was washing it and it turns out that he used to bring fish from the island and sell it in Dili.  I am ever the one to try and knock off a few birds with the one stone so we ended up cutting a deal like this:  we trade rice, kero, plastic, Bibles and other things for fish and bamboo from the island.  You may remember that it is illegal to cut and bring in bamboo to Dili without appropriate letters (which are very difficult to get).  But there are no guards on the beach!  For us this solves a problem of getting our hands on a renewable building product and it provides food for the islanders without them having to use up their hard earned cash.  In a sense it opens up work opportunities for a number of fisherman and farmers on the island.  The catch is, can we m 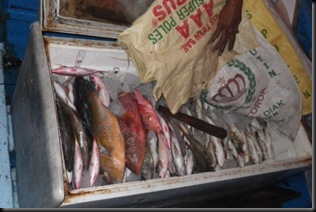 ake it financially viable.  On Tobias’ first run it was at a cost of $122 and he returned with $163 worth of goods making a humble profit of $41 which we split 50/50.  (We need to cover boat maintenance and he needs a wage).  Its not much, but its a vast improvement on the straight fishing venture which cost $115 and returned nothing (in large part due to the less than responsible Timorese man we were trying to help).  Tobias is also using some of the fishing gear supplied by Geoff, Nick and Graham.  He’s just finished he’s second run which we haven’t counted up but so far its looking ok.  There are still a lot of things to iron out before we can say its a winner.  For example, on this second run he tried to come back Saturday morning but got stuck in a rain storm and ended up arriving in at nightfall on the beach with a fridge load of fish which is quite hard to sell at that time.  He spent all Sunday trying to sell it and will still be trying to sell the fish today which is fast going bad.  This incurs extra cost of buying ice to keep the fish.  Also it goes hard against my religious grain of wanting to keep Sunday as a day of rest.  His trading meant he 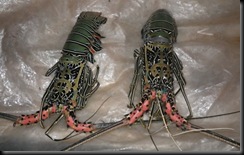 missed church on Sunday.  I said a prayer or two to the living God.  I believe He is merciful and we’ll definitely be looking for a better trading plan.  Oh, and on an environmental front, he brought back two good sized bugs (like crayfish) with massive egg sacks under the tail – oops.  Dont tell any of my hippy friends – I hope they are as merciful as God is.

Tobias seems an honest man and I pray that God will bless him hugely and we can find a way for him and the many families that will benefit from this concept.  So thats my take on the “teach a man to fish” line.  I am not sure that its so much about teaching them to fish but looking at the skills they already have and tweaking the process to make it work, perhaps thats it:  “tweak a man to fish” 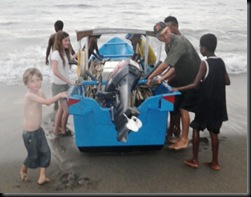