Yesterday we were able to see our little ship off to embark on a circumnavigation of Atauro, the island north of Dili.  They are loaded up with a couple of drums for corn storage, the next generation of water filter sets, improved food grinders and a new product for Timor-Leste:  chicken wire! 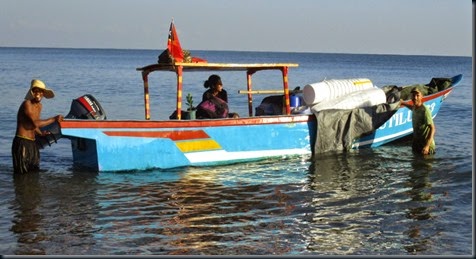 Our beautiful boat after a recent makeover where Tobias (left) has given the roof a new paint job and more importantly plugged the hole underneath.  Note the pot plant heading to the island! 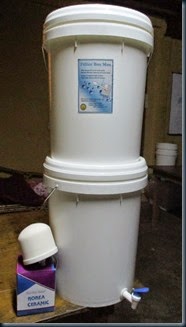 The white buckets are the new filter sets.  Its a food grade plastic specially imported for the job.  It sports a new dome ceramic filter with activated carbon inside and impregnated with silver, a dispenser tap and sticker to explain how to clean the filter and contact details for replacement.  With a total of 40L of water storage, I think some Timorese families value it as a convenient water storage device more than its ability to provide safe drinking water.  One system like this will set them back $25.  Tobias and Emmy sold five at the first village they stopped at.  They have 25 big sets and 24 medium sets to be delivered to at least 5 villages around the island.

Corn is the staple diet of Timorese.  It is a hard grain like “maize” rather than a sweet corn and it is often ground into a grit before eating.  The most common method of grinding corn is to pound it in a hollow log.  It looks very cool but its hard work for the women and not altogether hygienic as dogs and pigs like to clean out the log when they have finished.  I’ve also heard of risk of prolapse if this work is done with a weak uterus such as after giving birth.  Another grinding technique 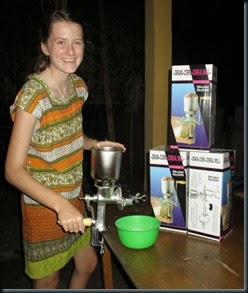 is to place one or two grains on a rock and smash them with another rock – a bit tedious.  So I thought of introducing the hand grinder.  Its a simple design similar to a meat mincer and is extensively used in South America.  It bolts onto the table and grinds a bowl of corn in a few minutes.  I found a model to demonstrate this one.  The boat is carrying 36 of these at $20 each. 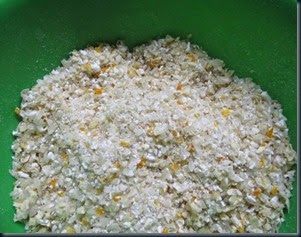 The corn grit from the grinder, size is determined by distance of the grinding plates from each other.  Flour can be achieved with patience.

For those into the bits and pieces, here are some pictures showing detail: 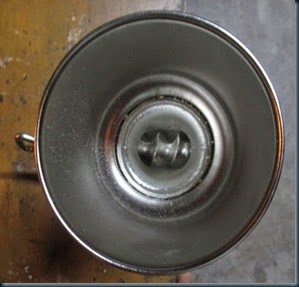 The hopper from above. 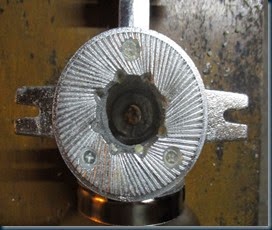 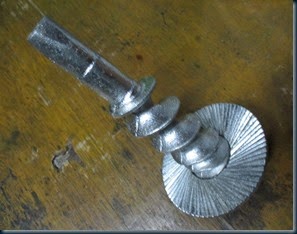 The moving plate with screw thread for feeding the grains toward the grinding plates, and shaft which connects to the crank.

The boat is also taking two rolls of chicken wire which will help to save chickens and vegetables.  Unfortunately, at $80 for 50m, it seems a bit expensive.  I might try to get them to cut it into 3rds to bring down the price and allow testing of the mesh.

So all up, this boat is carrying around $2000 worth of gear which is a serious haul for these guys.  Lets hope the sea is kind.  The 5 day journey will end at the main town on the island in time for the national day of independence.