Still plugging away out here in Timor-Leste.  Things seem a bit frantic in my mind as we get ready for the wet season.  Farmers depend on the rainy season to grow their staple crops.  The general plan is to grow as much food as you need for the year in one crop.  So they dig up an acre or so of land and plant their corn.  Or the flood a field for rice a bit later on.  Many farmers only get one shot at this.  And we only get one shot at helping them to improve techniques and try new ideas.  In Seeds of Life, I’ve been organising 100,000 Maringa tree seeds for seed packs that will go out to the groups that Seeds of Life work with.  Its just  a small part of our work this year but it ticks a nice greeny box inside of me.  There’s also all the velvet bean seed to prepare for growing mulch on the fields, a 40ft container of corn shellers and grinders to order and the weather stations need to be calibrated before the rain comes.
Cynthia has found the inspiration (from Lord knows where?!) to plan a serious expansion of Bele Kria.  The last few months have seen the girls employ extra women to fill women’s sanitary pad orders for distribution through NGOs.
The water filter thing is gaining momentum.  But since yours truly is so stupidly busy I’ve palmed this little baby off to Serenity as a small business.  So she’s busting out her wallet to pay for buckets, filters, taps and the labour to make them and then managing sales and distribution.  She manages this with an excel spread sheet to show income, expenditure and wot-not.  She’s also communicating with China to negotiate the import of supplies.  So it seems it did not take long for her dad to corrupt her innocent childhood existence and thrust her into the adult struggle for survival.  But I think she’ll learn from it, turn a profit and deliver affordable drinking water into Timorese households.  Not bad a for a cute 14yo.
Thinking of a little forestry venture in my lack of spare time.
Bought a bunch more new testaments which are going out like hot cakes (including another order to Ireland).
Got 10 laptops sent out to us from Graham and Lynelle.
Lots of cool folks have visited us recently – we love all you visitors (more or less). 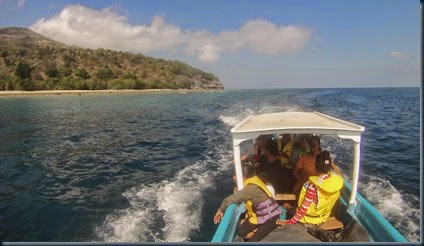 Took a sweet little group of Campus Crusaders out to Atauro.  They saw dolphins and whales for the first time in real life and mainly had a rest from their hard work of telling others about Jesus at the unis around Dili.  While bumming along the ocean surface for the few hours there and back I began to dream up a bigger boat – imagine a lightweight double hull structure with props mounted on drop-down hydrofoils and powered by air-pressure from air tanks filled using solar power.
Yes, the salt spray does things to a mind like mine.  You should try it one day.
at 8:22 PM