A corn sheller for Timor Leste

A while back now my sister brought a corn sheller from America for me to take to Timor Leste.  Its a cast iron machine that takes kernels off the cob.  These things were invented about 100 years ago or more by some Aussie guy (I dont really know actually but figured we Aussies should take the glory because its such a fine invention – and we dont mind stealing things).  In Australia, we stopped using machines like this about 50 years ago.  The technology is forgotten by most people and it was never passed on to people in developing countries who are left doing the job with their bare hands.  There are actually a bunch of ideas like this that can help bring practices out of the middle ages and into the 20th century.

I’ve finally had the chance to take it out to Lino to give it a run with some of his corn.  If you check out the video you might notice it was pretty hard to take the smile off his face while he was cranking this machine.  It took him about 20 labour days to shell nearly 2 tonnes of corn last season.  We reckon with this machine he could cut it down to 5 days.  Sturdy technology like this helps to make Timorese famers more efficient in their work and hopefully makes the whole farming business more viable.
We’d like to get this machine out to a heap of farmers across the country which will likely happen through connections with NGOs. 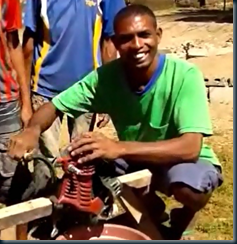 Now that I’ve wow’ed you with yet another cool idea… lets get a little D & M.  Is this actually a good idea?  What does it mean for a human to have more stuff?  Should the farmer buy it or get it for free?  Will this mean he gets hooked on our developed country’s vicious treadmill of always looking for the most efficient way of doing things?  What does production of this machine mean in terms of a carbon footprint and more mining to make all that steel?  Shelling corn can be a very communal activity where a bunch of family members sit around together for a number of days and all help to shell the corn while telling stories.  What will mechanisation do to that cultural activity if one guy is sitting there trying to rip through the cobs as quick as possible?  And before we jump to condemning me as a culture destroyer, what if I thought it was a nice cultural activity but they saw it as a tedious task struggling to get it done while it belts down rain knowing that the other family members will want to take more than their fair share of his corn in return for having shelled it?
It would be pretty hard to get to the bottom of all these questions.  In the mean time, Lino looks pretty happy.
at 9:00 PM