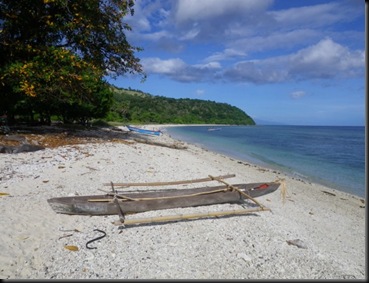 Last weekend I went to the island of Atauro.  Its always an adventure for me that usually involves getting absolutely saturated.  The voyage had 3 tasks: fix the satellite weather station, take a group from WEC to explore the island and launch a small eco lodge called “Emmy’s Place.”

We set off with 5 WEC staff, two 44 gallon drums, a sack of cement, steel pipe for the weather station, 60 new testaments, posters for the school and some survey gear.  The first stop was the weather station where the wind direction sensor was broken – couldn’t get it going again, drat.  The boat had gone on to the next village so I took a 3 wheeler with Patrick (Swiss) up the track to the next village.  The 3 wheeled motorbike is a main form of transport to get to the market and by the time we arrived the poor little thing was carrying 11 people.  We had some fish and rice for lunch and I joked about dried squid for dessert.  Unfortunately, Anina (Swiss) took me up on the joke and said she’d always wanted to try some (?!?).  As a man cannot be outdone by a woman on matters of gross and smelly looking food, I therefore had to try it myself … erk … sort of dry, very chewey, tasteless with a hint of something rotten drifting up your nostrils.  I must confess, she continued munching away, so in the end I was outdone. 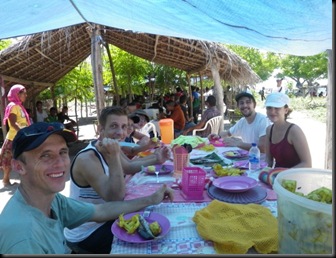 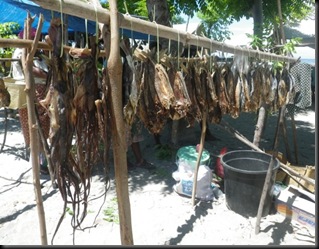 Assortment of squids and fish drying (smelling) in the sun

From there we ventured around the beautiful limestone cliff coast to the west being chased by a little storm.  Things were looking a little miserable on board so I jumped overboard by way of entertainment.  Diving or snorkelling brings you into a new and magical world and since living in Timor I am learning to dive deeper. 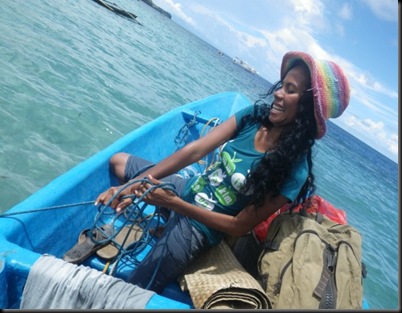 The famous Emmy, weighing anchor to set off for her home village of Atekru.

Atekru is, I think, the nicest beach on the island, and in fact the nicest beach I’ve seen in all of Timor.  Its a beautiful sweeping bay of yellow sand sitting behind a limestone reef.  The village is set on a strip of land bordered by the coast and a limestone cliff behind it.  The people grow corn, cassava, sweet potato, various beans and have pigs and goats and chickens.  To this diet, they add rice and fish.  Their best building is the church which is a carefully built structure of concrete and tiles. 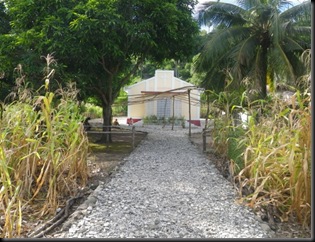 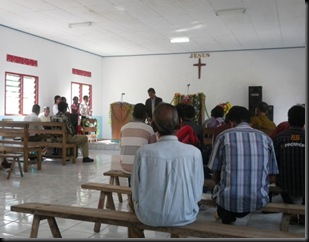 The path to the church – there are no roads or vehicles in this village.

The locals were very happy to see a group of foreigners – we’re still a bit of a novelty.  The snorkelling was amazing in that the reef tended to form shelves, crevices and tunnels that you could dive through especially if you didn’t have tanks and didn’t mind a bit of risk here and coral scratch there.  I found it fun anyway.  There were some cool little fish that darted about and looked like they were glinting in the sunlight but if you came up and looked carefully you find they were actually flashing from light coming inside their little bodies.  As they were darting about in schools of hundreds, the show looked very enchanting.

They loved the Bibles, and I was surprised to find that many did not recognise this Tetun New Testament like they did on the mainland.  In this place they say that the Holy Spirit came to them in the 1930’s seemingly out of the blue.  They turned and followed God.  They gave up their public animistic practices and burnt their spirit poles and broke down their altars.  Then again the Spirit visited them around 1976-77.  At this time people brought out their sacred ornaments they had hidden in their huts to burn them up and follow God completely.  It is quite amazing how this has altered their thinking and cultural practices after 30 years or so.  They run their own churches and conventions and have a Bible college and are part of the Assemblies of God Church.  There are no missionaries on the island that I know of. 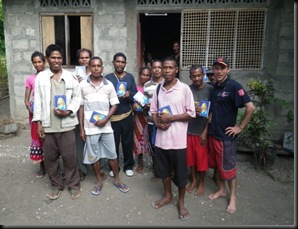 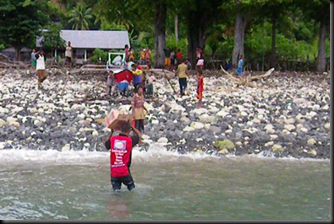 New Bibles for Atekru … and a quick drop of Bibles to another village, Maker.

So we measured up a small patch of land, 20m x 30m, and I gave Emmy’s dad a sack of cement and $200 and we discussed plans and building materials.  The idea is to use as much labour and materials from the village as possible rather than importing stuff.  They are keen to make it happen.  They’ll start with a loo, simple wash room and thatched hut.  Then we’ll look at an eating shelter and another hut which we hope will be a tree house.  By some strange coincidence, the next day the regional chief came to inform the people that Government has now declared ownership of the first 50m of land all around the coast (of all of Timor?) and anyone wanting to do anything on this coastal strip must now negotiate with the Government.  Bummer.  The people didn’t seem so concerned though that the Government just took their best bit of land.  So we’ll just go ahead and build the thing anyway – we have no choice really, the whole of Emmy’s dad’s block that was measured up is within this 50m.  (I assume most people in Government have not seen a 50m tape measure). 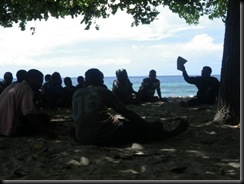 The land where we plan to build Emmy’s little resort and the next day meeting with the chief who announces the Government has taken the beach front. 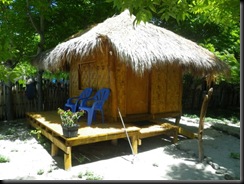 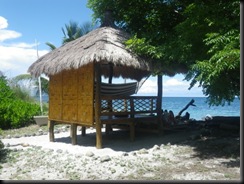 Ideas for huts from Barry’s Place on the other side of the island.

On Sunday night, I got to sit around with the WEC people (3 Germans and 2 Swiss) and play cool European card games.  We came home on Monday morning with some big waves and got saturated but also saw a large pod of Pilot Whales breaching, jumping and somersaulting as well as a pod of dolphins and the usual flying fish (that really fly) and funny fish that run along the surface of the water standing upright using their tail fins for feet.  Just for fun, after running for 20 or 30 meters, they jump up in the air and dive back into the water. After about 3 hours, we arrived back safely on the beach with less than a litre of fuel left (oops). 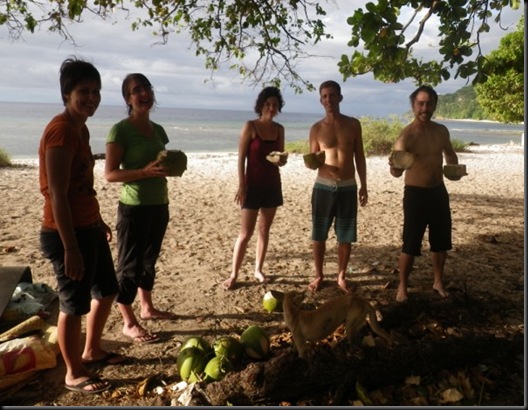