How to Make a Biogas Digester 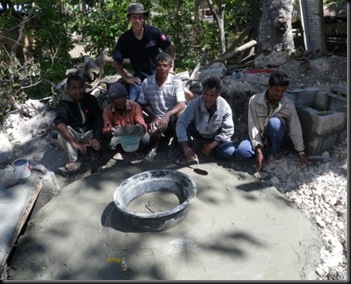 Do you ever have a ‘dream on the side’?  One of those things that you’d like to do but because there are other things to do you just let it cook away in the background and maybe it will never happen.  Well sometimes those dreams can come true.  I have wanted for a long time to help people in a developing country make biogas digesters. 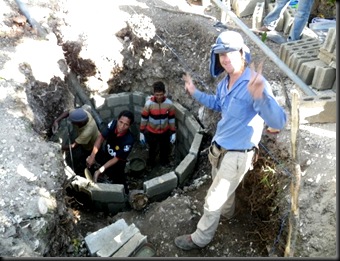 Here in East Timor, the forests suffer from being chopped down for fire wood and the women suffer lung disease from a life time of cooking over an open fire.  Last weekend, I got a chance to assist in a workshop on making a biogas digester.  It was funded from a small Japanese NGO called TNCC to help ‘grass roots people’ (say that with a Japanese accent). 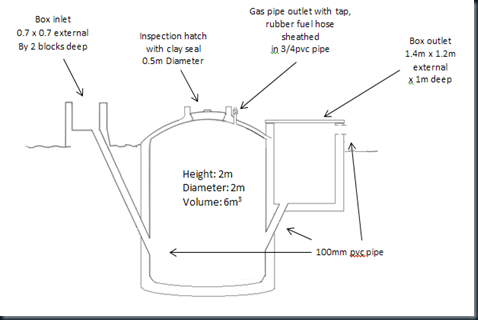 Step 2: Lay a slab and some blocks in circle (circles are very sweet things)

Step 3: Put in an intake pipe (100mm PVC) for the manure to flow in.  Lay it straight with no bends and so you can ram a plunger down if there’s a blockage. 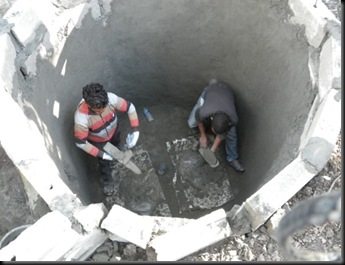 Step 4: Put in an outflow box with enough volume and height to create pressure to help the biogas flow to the kitchen.

Step 6:  Render the walls by throwing mortar mix at it and smoothing off.  The whole thing is then painted with a watered down cement paste (no sand, just cement and water, they like to make this a runny paste).

Step 7:  Lay the dome lid on the digester and install the gas tap.  We tried this using woven bamboo – great concept but it collapsed with the weight of the wet concrete so we did it again with bamboo upright supports underneath.  The manhole in the top comes from a Japanese design that seems to work.  We use a washing up tub as a mold and it gets sealed with wet clay. 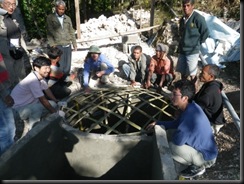 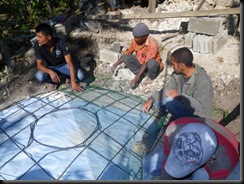 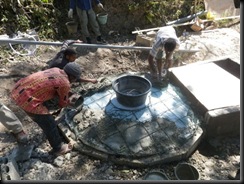 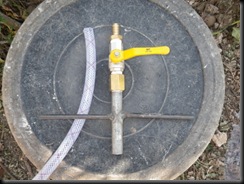 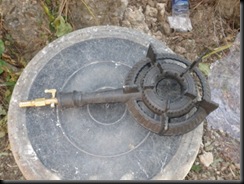 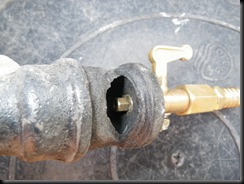 I drill a 2mm hole in the jet of the gas burner because the digester usually has very low pressure.

Step 8:  After a week or two, get in and remove the form work and render and seal inside the lid area.

Step 9:  Do a water test to make sure that it does not leak either water out the bottom (which will dry out the manure slurry) or gas out the top.

Step 10:  Fill with manure slurry! (ratio 50% manure, 50% water)  Its best to have lots of cow manure and goat manure and a bit of pig manure and a little chook manure but I think chuck whatever in just try to do it regularly.

It actually takes a week or two for the oxygen inside the system to be used up in making CO2.  So don’t be disappointed if you first get gas that doesn’t light up.  Just let this gas out (while you’re trying to light it up).  After the oxygen is used up, the bacteria produces methane, CH4, as a waste product.  (Methanogenesis).

My good mate Rohan came to help run this project and I am very thankful for his willingness to come and lend his technical expertise to make this a reality.  It was part of a conference of 10 community groups coming together to learn how to build a digester so they could go back home and do it themselves.  It was important that the design was cheap and used materials and skills that were locally available.  Unfortunately for Rohan, his name is a useful Tetun word meaning something like the “leftovers at the end”. 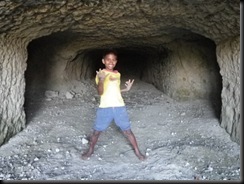 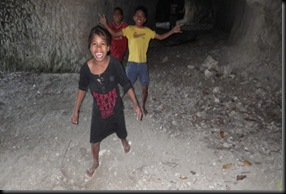 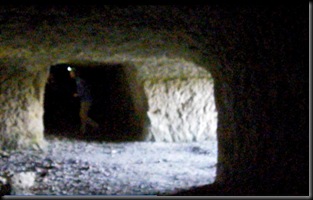 On the way home we got to inspect the caves built by the Japanese with forced labour from the Timorese during WWII.  They were used to store weapons  and apparently as a sort of prison.  Many jokes and references were made about the Japanese, Aussies and Timorese all working together on this biogas digester.  But I think it meant something to us all that we were here together, 60 years later, not to kill each other but to help each other. 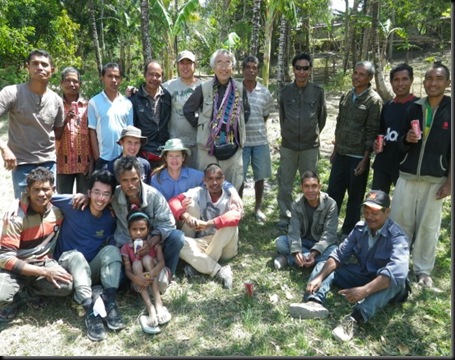 Many thanks to Mr Takahashi and Shiro for organising the conference.