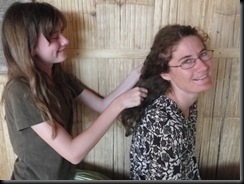 A couple of weeks ago Israel thought that it would be nice to have a baby brother or sister.  So the three of them said a little prayer and now Cynthia is pregnant.  Hence, I really don’t think that it has much to do with a stork.

Israel is not sure whether he wants a boy or a girl.  He reasons that a sister would be less annoying (as he seems to be aware that he is annoying) but then a brother should mean more cars to play with.  Serenity would like a sister so she can do girly stuff with her like brushing hair.  This will be child number 3 and if all goes well it will be seven years since Israel was born, Serenity will be 13 and its about 17 years after we were married.

We are not sure yet where Cynthia would give birth.  We’ll have to ask a few questions down at the embassy.

That's wonderful news! A new child is an amazing blessing, whether boy or girl! Lots of fun waiting to meet the new one too. I hope Cynthia keeps well.