The Burden of the Funeral Ceremony 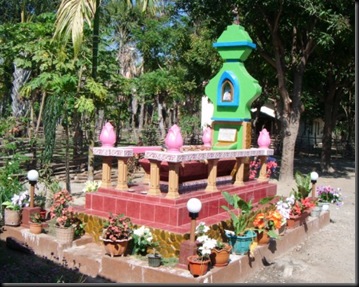 Last night was the big funeral ceremony amongst our Timorese family called “Kore Metan”.  This means “cutting the black” or taking off the black mourning clothes.  It was this time last year that my closest Timorese friend suddenly passed away.  It was a very difficult time for us.  The widow was left with 6 children to raise and many young people that they were supporting through school and university.  She has been living mainly off the proceeds generated through a house investment that I started with this man, Maun Je, in 2008.  One year after a person dies they have a special ceremony.  This ceremony is bigger than the actual burial ceremony and preparations for it have been going on over the whole year.  The grave itself has become a monument to local Timorese art.  I know of at least 24 families that are involved in this and each have specially agreed obligations for what they must give and receive around the time of the ceremony.  Lots of cows, pigs, goats, chickens, rice and alcohol have exchanged hands.  This requires substantial logistics to transport all the gear including various cars, trucks and even our boat going to the island (for cheaper pigs).  I have taken this opportunity to start my veggie patch as there is so much cow poo around and I know the animals will all be dead soon.  Extra kitchens and sleeping huts are built to accommodate the families coming for the festival.  Lots of sitting around, gambling, smoking and drinking (bingo for the kids) occurs in the days leading up to the festival as a sort of social activity.  At the time of the ‘festival’ itself, a large, 4-tier cake was prepared, 300 chairs hired, massive speaker stacks  and a huge feast was laid out on long tables.  A ceremony is performed where flowers are placed, prayers are recited and a ribbon is cut.  Traditional weaving is exchanged between the two main divisions of family groups.  The last of the mourning takes place and the black clothes are removed.  After formal speeches, we ate dinner at 10 o’clock.  (If you’ve ever read Asterix and Obelix comics as a kid then you’ve got some idea of what the feast may have looked like.)  After dinner, the music is cranked up and the party really starts.  All the young boppers dressed in full night club gear come out and boogie.  If you thought you were a party animal staying out dancing ‘till 1 or 2am then these guys will give you a run for your money – they dance all through the night until the sun gets up (6.30am) and then some.  Its not a real party unless you dance ‘till sunrise.  Don’t bother calling the police at 10pm for noise issues.  As far as parties go, it went fairly well.
Ok, thats what I call a fairly objective take on the whole deal.  But we, from the developed countries, are prone to making judgements so I will let a little out.  I think it was a bit over the top really – all this effort and expense (more than a year’s wages) being poured into a one year anniversary of a person’s death.  That’s trying to describe my thoughts mildly.  During the preparation a few days ago one of the three main ladies involved who was 7 months pregnant started to bleed and was taken to hospital (working too hard).  Her husband, the last remaining man of the three main families we live with went to visit her, taking Cynthia’s main sewing lady, Sinta, and had a motorbike accident on the way.
We will support the two widows over the next month or so with money for basic food to survive as they have no money left and have even gone into debt to put this party on.  Sometimes people look down on Christians who go to other countries as ‘missionaries’ and try to change culture.  I’m not claiming to be a missionary but I am saying that, in the name of Jesus, if I could somehow influence these people just to take it back a peg or two and put a bit more 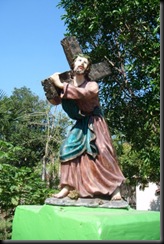 effort into the living and a little less effort into the dead then I will.  Before you ram cultural tolerance down my throat I’d suggest you come and put your life on the line alongside these guys and see just what grips them.  On the theme of cultural judgements, I think we in the developed world could learn something from the Timorese and give a bit more attention to the dead.  Tucking away our rellie’s ashes into a neat box in a brick wall seems a bit too efficient and tidy for my liking.  I’m speaking about general things and not individual situations so I apologise if I’ve offended you.  I’ve probably just succeeded in offending the whole world… oops.  It has been quite painful watching our Timorese friends around us carry this burden so we are glad in a sense that it is over.  I too will try to move on from losing my good friend so suddenly last year which was who this ceremony was for.
This picture shows the detail on top of the grave – Jesus carrying the burden so we dont have to.  Thanks God.
at 3:20 PM