We had two Aussie men arriving Monday morning the 16th
We were a bit concerned about the arrival of these men as our truck was still in at the mechanics waiting for the brakes to be installed.  We had waited 3 weeks for the parts to arrive from Australia, and then they were too big, so they had to be filed down and adapted etc.  We were asking God to let it be ready so we could take the men to Los Palos for the week.

Then our neighbour developed a severe headache in the early hours of Sunday morning.  He awoke with a scream, got out of bed and vomited, then walked a little way before falling over.  He improved slightly, enough to lay on a couch.  The severe headache persisted all day with no help from medication..  We urged and urged them to go to hospital, but he and the family resisted.  We put Serenity and Israel to bed, and sat up at the table trying to pray, read, sing.  I (Cynthia) heard some strange noises, and soon realised it was Maun Je's breathing - laboured and gasping.  I knew then it would not be long.  I started to cry.  I was so angry and sorrowful, I could not stop sobbing.  Samuel took me up to bed where I sobbed for a while before quieting down.  Samuel soon returned and urgently insisted i get up and get the children into the car.  As soon as the family became aware that Maun Je had stopped breathing they would commence their loud wailing throughout the night and the next day.  We both knew i was in no state to remain waiting for that to commence.  As we drove away all i felt was anger.  But the further we drove, the calmer i felt.  I no longer had to wait for the start of the wailing.  we called a lovely missionary who lived 5 mins away (thankfully she was still awake at 11:30pm).  She welcomed us around, and Samuel dropped me off to try and get some sleep there with the kids.  I lay weeping for a long time and finally drifted off for a few hours sleep before waking before dawn.  I knew there was no way he had lived.  Tragically he died around 11:30pm that night.  It was such an intense shock to us all.  He was Samuels’s best friend here and assisted Samuel in many projects.  He was fit and strong and didn’t smoke or drink alcohol.  He left 6 children behind in ages from 13yr old twin boys to a 3 yr old girl.  We now have 2 widows out of the three families living here.  Praise God Maun Je had worked with Samuel in 2008 to create 2 apartments which will continue to provide an income for his family.
Samuel spent the night with the mourning family and drove to the airport at 7:30am to pick up the two men.  We were able to take them to the MAF house to do some internal painting.  Samuel was busy for most of the day helping witih various jobs related to Maun Je's death. Praise God our truck was ready to use again in the afternoon.  We then drove to Hera and stayed the night.  In the morning Samuel took the men to the preschool and built a cupboard with them.  In the afternoon we drove back to Dili for the funeral.
The next morning (Wednesday) we headed to Los Palos.  Samuel, Nick and Graham worked really hard to lay tiles through almost the whole house, including the "bathroom", and also brought it to lock up stage, with front and rear doors built and installed, 5 internal doors built, all windows fly-screened and security meshed, and a new slab out the back for a laundry space. 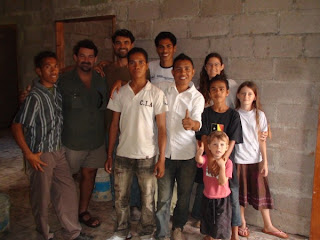 As it takes us a full day to travel each way, they only had 3 working days at Los Palos, so they really pushed themselves, working till after 9pm on the last evening!  Sunday morning we joined in the church service and Samuel preached a great sermon (more below). We drove back to Hera on Sunday afternoon, and stayed overnight there at Branca and Sorayas house.  In the morning Samuel checked on the water projects at Beraka and we also managed to visit Sidara.  We drove to Dili, did a bit of tourist shopping and then Samuel quickly showed Nick and Graham around our place and our projects, before driving them to the airport.

Samuel had been reading through Isaiah every morning.  On Monday morning he read up to 41:9.  On Tuesday morning feeling very sad and discouraged he read only 41:10.  He asked God whether he could take it on.  Then he walked out to the breakfast table.  His phone had received a message.  It was a text from a good friend in Australia, giving some encouragement, and ending with "read 41:10".  Thanks be to God.
So do not fear; for I am with you: do not be dismayed; for I am your God: I will strengthen you and help you; I will uphold you with my righteousness right hand.
Isaiah 41:10
at 1:28 PM

wow guys it sounds like you have had a rough couple of weeks. i feel so sorry for the family left behind. are they coping ok? how are you all handling it? are the kids still fit and healthy? love to you all, xx