After 5 weeks in Timor


Last Sunday we spent at home with the kids having a rest and recovering from sickness. Samuel went to the morning Catholic service next door but the priest did not come. They sang some songs, said some prayers and read from the Bible and finished up early. Serenity has just got a fever and we expect it to last another 4-5 days. On Sunday afternoon (being mother's day) Samuel splashed out and bought a chook to make a roast dinner in a simple Dutch oven - check out the video. Cynthia has been working on a sewing project and is trialling her ideas with Nilda and asking other ladies who are interested for their opinions. Sunday being mother's Day, Cynthia had a go at cooking her first loaf of bread but had a bit of trouble with the whole yeast thing.

Samuel's week has been spent a little like this:

Monday - preparing plywood and timber for Soraya's cupboards at a Christian school.

Tuesday - going to Hera to install the cupboard's with Anen and Julio. Tuesday night pulling out the radiator that sprung a leak and teaching Timorese how to solder the radiator

Wednesday - putting the radiator back in to find another leak, getting supplies for the Nazarene Church in the truck (steel, timber, tools etc), leaving on a 3 day trip to inspect 2 different projects: water with World Vision in Baucau and the Nazarene Training Centre in Los Palos Its a 7 hour drive to Los Palos.

Thursday - Inspecting World Vision water projects to potentially resolve some water issues (they are considering employing Samuel), Going on to Los Palos and marking out the foundations and setting up a building team.
Friday - return home, swim, mark out foundations for new micro-finance project with Anen, seeing a neighbour who is about to die and spending time with his family.

I suppose it was a busy week but it didn't seem too bad except for being away from family.


A few stories about the week...
It was great putting in the cupboards at the school. We cut all the plywood and some of the timber in Dili and then take it out for installation which takes about 5 hours. It seems pretty quick to Soraya. She asked for these storage shelves for teaching gear about 6 weeks ago when I was still in Oz and then magically it appeared in one day. The road to Hera is a 'national highway' but it is atrocious! We dropped into a boghole about 70cm deep and 10m long. I didn't go too slow as I wanted the momentum to get through the hole but I think it was here that something flung up into the radiator fan and punched a hole into the radiator. On the way back we tried a different route which was being repaired after a massive landslide. We had to put rocks in the back of the truck for traction to get up the slippery hill and on the way down the other side we had to wait at very boggy road works while filling the radiator. I dropped in at a shop on the way home to pick up solder and a soldering iron for later in the night. One of the neighbours is a second year mechanic student but as yet has not had a chance to work on a car, so he enjoyed the whole radiator experience. 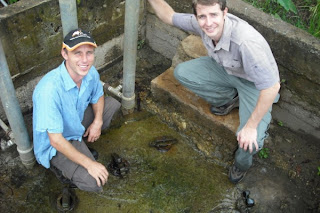 World Vision have a few rather large water projects in Baucau. Without going into too much detail, I'll just say they are not working well ... at all. I'd love to have a go at fixing them but I am perhaps a little too strange for World Vision. We'll see what they think next week.   Pic is of us inspecting ram pumps

It was great to lay out the foundations for the very exciting Los Palos Training Centre project. They have the land and the money and are ready to go. Last week I said to them that I could not take on their project but that I would help wherever I could. It was very hard for me to say "no" to them and "yes" to World Vision. But after we made the decision, the Los Palos guys rang me up and said an American was happy to come over for 3 weeks. So we've cooked up a crazy plan to get a Timorese builder to work with the Los Palos church to lay a foundation. The American will then, with help, erect the walls, then I'll storm in and whack on the roof with the Tweed Heads Salvo crew (I haven't told them yet - it'll be tough living conditions). I slept Thursday night at Los Palos. Last time I was with my family and had the best room and mattress. This time, on my own, I got demoted to the dank youth centre which smelt damp and musty and had mozzies flying around with no nets. I slept on a very thin, well-used "kapok" mat made from fluffy seeds a little like cotton buds. I was woken at 4am to leave for Dili - 7 hours away.


So how do you sit next to a man and say, "I have no medicine for your condition, you need to prepare to meet God." Lets just say that you do it with tears. This is Maun Silvero. He has been a severe alcholic for many years and his liver has so many holes that his body is leaking on the inside and swelling up with fluid. The hospital told him not to go back. His condition is deteriorating even though he apparently stopped drinking 3 months ago. I dont think he has long. So I went and prayed with him, and read Psalm 23. He said a long prayer asking that God might forgive him. I think God will be kind to him. He has had a very hard life. His family is extremely poor. There is a wife, 2 sons (young men, perhaps not of the most respectable manner), 3 daughters Laura (15), Anna-Maria (9) and Asika (4). There are some very good prospects for providing for them through an investment which I have started to discuss with Anen. Anyone got some money to invest? Failing that, I suppose prostitution could be a viable alternative.
We sent Nilda to buy a live chicken to prepare chicken soup for the dying man. She came back just as we sat down to lunch with a beaming smile and a cute speckled chicken which she gently put on the table in front of Cynthia to see if we approved. I said it would be fine and suggested she take it outside to be 'prepared'. Poor Cynthia!
The pic below shows Maria, a servant girl who we helped to get a small part time job with Mission Aviation Fellowship. 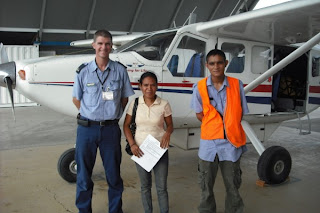